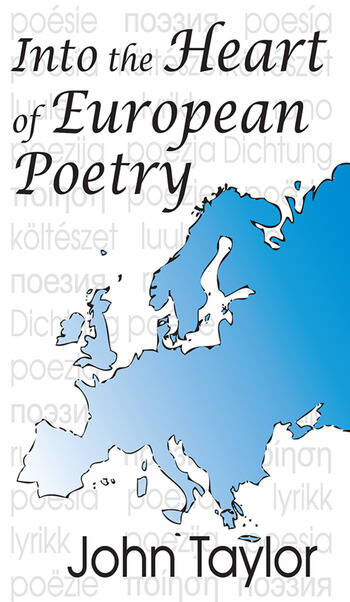 Into the Heart of European Poetry

John Taylor's brilliant new book examines the work of many of the major poets who have deeply marked modern and contemporary European literature. Venturing far and wide from the France in which he has lived since the late 1970s, the polyglot writer-critic not only delves into the more widely translated literatures of Italy, Greece, Germany, and Austria, but also discovers impressive and overlooked work in Slovenia, Bosnia, Hungary, Finland, Norway, and the Netherlands in this book that ranges over nearly all of Europe, including Russia.

While providing this stimulating and far-ranging critical panorama, Taylor brings to light key themes of European writing: the depth of everyday life, the quest of the thing-in-itself, metaphysical aspiration and anxiety, the dialectics of negativity and affirmation, subjectivity and self-effacement, and uprootedness as a category that is as ontological as it is geographical, historical, political, or cultural. The book pays careful attention to the intersection of writing and history (or politics), as several poets featured here have faced the Second World War, the Holocaust, Communism, the fall of Communism, or the war in the former Yugoslavia.

Taylor gives the work of renowned, upcoming, and still little-known poets a thorough look, all the while scrutinizing recent translations of their verse. He highlights several poets who are also masters of the prose poem. He includes a few novelists who have fashioned a particularly original kind of poetic prose, that stylistic category that has proved so difficult for critics to define. Into the Heart of European Poetry should be of immediate interest to any reader curious about the aesthetic and philosophical ideas underlying major trends of contemporary European writing. In a day and age when much too little is translated and thus known about foreign literature, and when Europeans themselves are pondering the common denominators of their own culture, this book is as indispensable as it is engaging.

Exalting What Is (Jacques Reda)

A Generous and Courageous Lucidity (Edvard Kocbek)
A Much Delayed Letter from Ljubljana (Veno Taufer, AlesDebeljak, and others)

My Life as Someone Else's (Kapka Kassabova)

Dark Struggles for a Utopia of Language (Ingeborg Bachmann)
In Search of Presence (Peter Handke)
The Poetry of Thomas Bernhard
Intriguing Specimens of Humanity (Veza Canetti)
A Delicate Touch (Peter Altenberg)
The Fertile "Crisis Years" of Rainer Maria Rilke
And How Hope is Violent (Paul Celan)
Seeking the Self, Seeking Beyond the Self (Hans W. Cohn)
A Radical Path to the Ordinary (Elke Erb)
A Noble Brightness (Peter Huchel)
The Poetry of W. G. Sebald
Facing Up to Unspeakableness (Robert Walser)

Russia and the Former Soviet Union

A Poetry of Acceptance (Rolf Jacobsen)

A French Stage Costume for the Matter of Britain: Florence Delay and Jacques Roubaud's Graal Theatre
The Gold of Ripe Fruit (Yves Bonnefoy)

Into the Heart of European Poetry