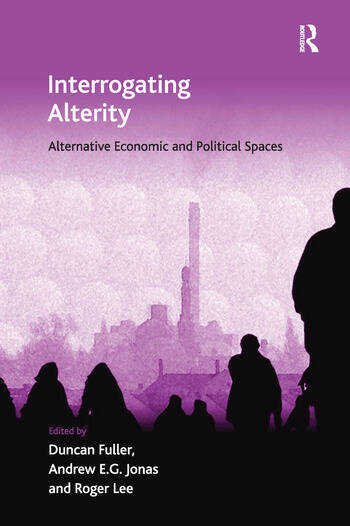 Alternative ways of thinking, analysing and performing economic geographies have become increasingly significant in recent years, partly due to the recent financial crisis, which has had social and political consequences throughout the world. Yet there is a danger that the debate about alternatives may become simply a way of fixing global capitalism in its present crisis-ridden form. Instead, the analysis of alternative economic spaces must continue to offer a critique of the very notion of capitalism as a universal, if variable, set of social relations. This important book brings together critical analyses of alterity from across the social sciences and humanities, refining and advancing what alternative economies and polities are, how they are formed, what difficulties and problems they face, and how they might be sustained. A central theme is the need to examine critically both the material contexts and the conceptual categories deployed in the making of alternative economies.

'This rich and inspiring collection samples an exciting new scholarly tradition, one that draws upon and feeds into the social movements that are transforming economies worldwide. At once supportive and critical, Interrogating Alterity is a must read for anyone interested in the other economies� currently taking shape on the ground.' J.K. Gibson-Graham, University of Massachusetts Amherst, USA and University of Western Sydney, Australia