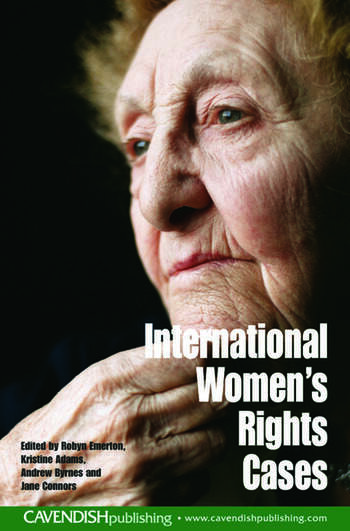 The last two decades have seen major advances in the legal protection of the human rights of women around the world. A series of international and national court cases has developed an important body of jurisprudence that has been relied on by courts and advocates in many countries to support women's claims for equality and the full enjoyment of human rights and fundamental freedoms.

Growing out of a series of judicial colloquia organized by the Commonwealth Secretariat, this compilation brings together a selection of over fifty significant cases from international and national courts. The cases are grouped by theme and presented in full text or edited format. Together they highlight the way in which courts have used international human rights norms and national constitutional standards to contribute to women's equality. A detailed introduction provides a summary of the significance of the cases and references further material available on women's human rights.

Cases decided under United Nations human rights treaties, the European and American Conventions on Human Rights and other international instruments, as well as cases decided by national courts in Asia, Africa, Europe, Australasia, and North America are all included.  The compilation will be of interest to all those with an interest in the advancement of the human rights of women especially equality advocates, lawyers and judges, scholars and students.

Use of International Norms by National Courts.  State Responsibility Under International Law for Violations of the Human Rights of Women.  Concepts of Discrimination.  Rights Relating to Marriage.  Rights as a Member of a Minority.  Rights to Respect for Family Life.  Reproductive Rights.  Right to Equality and Non Discrimination in Employment.  Right to Equality in the Enjoyment of Other.  Economic and Social Rights and Access to Economic Resources.  Equality and Non-Discrimination in Religion.  To Citizenship, Nationality and Immigration.  Right Not to Be Subjected to Violence

'The insightful commentary and selection of cases on the human rights of women and girls compiled in this edition provide a unique contribution to the scholarship on and advocacy of women's rights.' - The Law Society of New South Wales Journal

'A highly recommended and inspiring collection for all human rights enthusiasts, green or jaded.'

'The commentary provided by the editors is clear and succinct, assisting the reader to easily understand the relevance of the decisions selected to the themes discussed. - Nicole Schlesinger, Lawyer