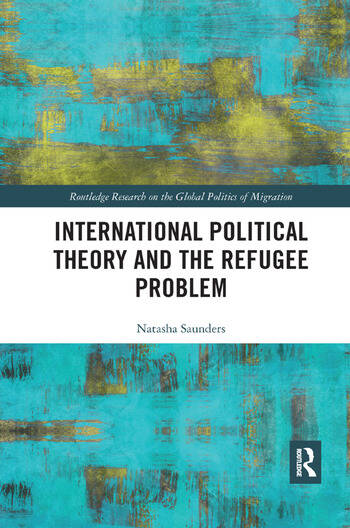 Beginning from the simple, yet too often overlooked, observation that how one conceives of solving a problem is inseparable from what one understands that problem to be, Saunders’ study explores the questions raised about how to address ‘the refugee problem’ if we recognise that there may not be just one ‘problem’, and that not all actors involved with the refugee regime conceive of their work as addressing the same ‘problem’. Utilising the work of Michel Foucault, the book first charts how different ‘problems’ lend themselves to particular kinds of solutions, arguing that the international refugee regime is best understood as developed to ‘solve’ the refugee (as) problem, rather than refugees’ problems. Turning to the work of Hannah Arendt, the book then reframes ‘the refugee problem’ from the perspective of the refugee, rather than the state, and investigates the extent to which doing so can open up creative space for rethinking the more traditional solutions to the refugee (as) problem. Cases of refugee protest in Europe, and the burgeoning Sanctuary Movement in the UK, are examined as two sub-state and popular movements which could constitute such creative solutions to a reframed problem.

The consequences of the ‘refugee’ label, and of the discourses of humanitarianism and emergency is a topic of critical concern, and as such, the book will form important reading for a scholars and students of (international) political theory and forced migration studies.

Introduction: Out of profound concern: for whom?

Conclusion: On Durability and Permanence

Natasha Saunders is a lecturer at the University of St Andrews. Her research interests fall within the field of international political theory, with a focus on issues of human rights, migration, statelessness, inclusion/exclusion, and identity.

'In this powerful book, Natasha Saunders challenges us to think about refugees in terms of their struggles for rights, sanctuary, and international mobility. Gone is the figure of the refugees as an abject humanitarian victim. Instead, Saunders provides the conceptual tools to perceive refugees as people enacting themselves as political beings. This is a bold and highly recommended intervention into the growing field of critical refugee studies.'— Peter Nyers, Associate Professor of Political Science, McMaster University

'Saunders' brilliantly interrogates and in true Foucauldian fashion uniquely cuts the hard-shelled "refugee problem" in two to reveal the problem refugees face and the problem they are deemed to pose. Confronting the former, Saunders compellingly explores Arendt's thought and decidedly pragmatic efforts like sanctuary provisions to bring us ever closer to understanding how displaced persons might again find their place in the world.'— Randy K. Lippert, Professor of Criminology, University of Windsor

'… fresh perspectives on how a research agenda in the political theory of immigration could be advanced in future – a topic that will certainly accompany the discipline in the upcoming years.'— Ireneusz Pawel Karolewski, Contemporary Political Theory