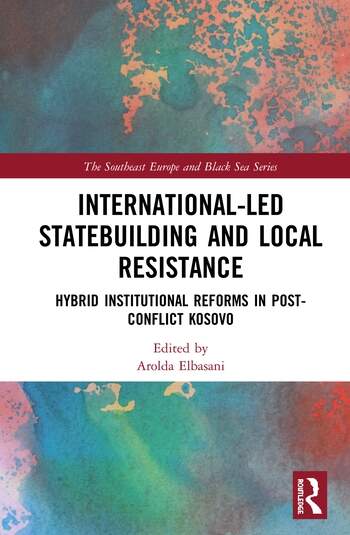 International-Led Statebuilding and Local Resistance contributes theoretical and empirical insights to the existing knowledge on the scope, challenges and results of post-conflict international state- and institution-building project focusing on post-war Kosovo.

Addressing challenges of state-building at the intersection of international interventions, local strategies of resistance, and the hybridity of institution-building experience with institutional reforms in Kosovo and in post-conflict contexts more broadly, International-Led Statebuilding and Local Resistance will be of great interest to scholars of international relations, state building and post-conflict societies. The chapters were originally published as a special issue of Southeast European and Black Sea Studies.

3. State-building and patronage networks: how political parties embezzled the bureaucracy in post-war Kosovo

5. ‘The association that dissociates’ – narratives of local political resistance in Kosovo and the delayed implementation of the Brussels Agreement

6. Education for whom? Engineering multiculturalism and liberal peace in post-conflict Kosovo

7. Statehood without an army: the question of the Kosovo Armed Force

Arolda Elbasani is a Visiting Scholar at the Center for European and Mediterranean Studies at NYU, USA, and Academic Supervisor for a project on new statehood, Kosovo Foundation for Open Society. Her research interests and publications lie at the intersection of Foreign Policy, Promotion of Rule of Law, Post-Conflict Statebuilding and Islam and Religious Pluralism with a focus on Southeast Europe and Turkey.