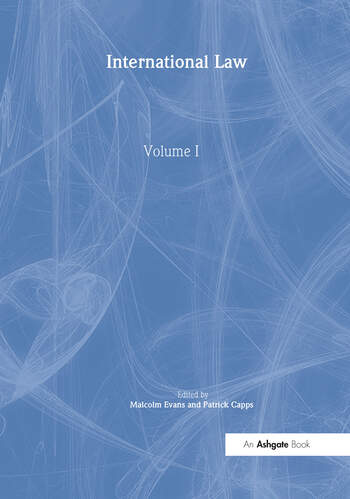 International Law, Volumes I and II

Over the last 300 years public international law has developed from a set of principles, ultimately grounded in natural law, into an extremely complex web of norms, supporting and sustained by an array of international institutions which, in combination, present a system for the realisation of global public order. These volumes, arranged into five parts, bring together key writings which both illustrate and exemplify ideas that have informed the historical development of the discipline. The first part outlines three approaches, based on systems of natural laws, positivist systems and finally the system of 'public' international order. Parts two to four reflect aspects of the issues raised in this introduction in the context of a number of key areas of substantive law, these being sources, personality and jurisdiction and immunity. The final part then takes a look into the potential futures of international law and the international legal system from a variety of perspectives, including global administrative law, transgovernmentalism and public law conceptions of international order.

'...International Law is surely a commendable first step towards filling what is becoming a really irritating gap in international law literature.' Legal Studies

International Law, Volumes I and II