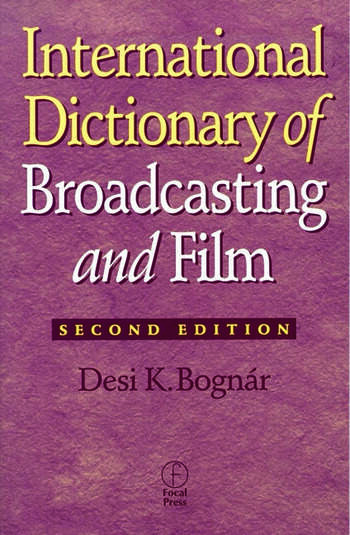 International Dictionary of Broadcasting and Film

No matter what continent you are on, the distinct professional language of radio and television broadcasters and film and video makers remains the same. Still the only reference that is international in scope, The International Dictionary of Broadcasting and Film, Second Edition is a comprehensive guide to professional filmmaking and broadcasting terminology. Entries also include information on professional organizations, festivals and awards. Appendices contain tables of international television and film standards, frequencies and channels, and a list of national and international news agencies and their standard abbreviations. This book has been substantially revised and updated to include coverage of the new digital technology, plus information on the history of film and broadcasting. It is a valuable reference to professionals in broadcasting and filmmaking, as well to students in these fields. Desi K. Bognar is a three-time Fulbright scholar in media who has been a documentary filmmaker, writer, reporter, producer, and broadcasting/film consultant. He lives in Peacham, Vermont.

Praise for the previous edition:"In a time of ceaseless migrations between continents and media, many will be grateful to Desi Bognár for this painstaking linguistic gazetteer." -Erik Barnouw, Author of Tube of Plenty: the Evolution of American Television and Documentary: a History of the Non-Fiction Film; Editor-in-Chief, International Encyclopedia of Communications."...Handsome, intelligent, well-put-together...And now I know what 'Noodling' is!"- Professor Robert Onopa, University of Hawai'i at Mãnoa"[The] International Dictionary is excellent and fulfills a very important/felt need..." - Dr. S. Krishnaswami, Krishnaswami Associates, Co-Author of Indian Film, Madras, India

International Dictionary of Broadcasting and Film