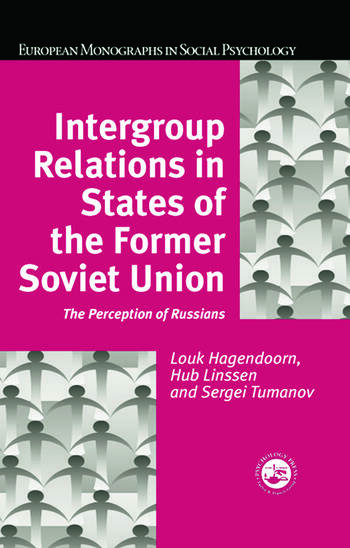 Intergroup Relations in States of the Former Soviet Union: The Perception of Russians

The disintegration of the Soviet Union in 1991 left 25 million Russians living outside the Russian Federation. This important new book explores their social identity, examining the mutually held perceptions, fears and resulting nationalism of both the ethnic Russians living outside the Russian Federation and the indigenous, or 'titular', populations they live amongst.
Based on a unique study involving national surveys conducted in Belarus, Ukraine, Moldova, Georgia and Kazakhstan, the book maps the main individual, intergroup and cross-national factors that shape the fears of 'titulars' and Russians as well as the possible consequences and the risk of ethnic conflict in the five republics. There is detailed statistical analysis of how background factors (personal and national) affect intergroup perceptions; along with discussion of mutual stereotypes, social distance, language and the perception of citizenship and analysis of the dynamics of assimilation and separation of Russians in former soviet states. The attitudes of both groups to other smaller minority groups are also examined.
This book provides significant new conclusions on the complexity of intergroup relations and seeks to relate these findings to a general theory of intergroup relations. It will be essential reading for those working in this area within the disciplines of Psychology, Sociology and Politics.

Louk Hagendoorn is professor of social science at Uterecht University. He was academic director of the European Research Center on Migration and Ethnic Relations (ECOMER) and now chairs the Department of Cross-Cultural Studies at Uterecht University. He has published extensively in the fields of inter-group relations, the nature of stereotypes and racism.
Hub Linssen is assistant professor at Uterecht Unviersity and research fellow at ERCOMER. His main research interest in in methods of comparative research on inter-ethnic relations.
Sergi Tumanoc is associate professor of sociology at Moscow State University and director of the Survey Research Centre OPINIO, in Moscow. He directs large-scale surveys on social issues in the Russian Federation and the former Soviet Union.

This volume could become a major contribution to our understanding of interethnic prejudice and conflict. Its unique data offer the opportunity to test many of the field's leading theories in new intergroup contexts. Thus, it promises to be a significant scholarly work that all major libraries and students of intergroup relations will need on their shelves. - Thomas F. Pettigrew, University of California, Santa Cruz

The intellectual level of this project is exceptionally high and a very impressive work has been produced. The authors have come up with important and, occasionally, unexpected findings. This book has pushed back the boundaries of our understanding of interethnic relations in the former Soviet Union. - Richard Sakwa, University of Kent, Canterbury

By its scope alone, this study is interesting. More than that, it is impressive for the sophistication and scholarly rigour with which it deals with the material. As attitudes are measured on several levels, and a complexity of possible causal pathways are explored, the book stays firmly focused. The findings are convincing, policy-relevant and sometimes surprising. The combination of psychological approaches to loyalty, prejudice and conflict with statistical surveys in this case has created a study that very nicely builds on existing social science work on the Russian diaspora. - Journal of Peace Research

Intergroup Relations in States of the Former Soviet Union: The Perception of Russians