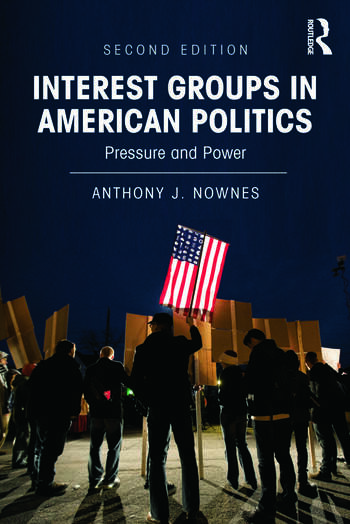 Americans rail against so-called special interests but at the same time many members of society are themselves represented in one form or another by organized groups trying to affect the policymaking progress. This concise but thorough text demonstrates that interest groups are involved in the political system at all levels of government – federal, state, and local – and in all aspects of political activity, from election campaigns to agenda setting to lawmaking to policy implementation. Rather than an anomaly or distortion of the political system, it is a normal and healthy function of a pluralist society and democratic governance. Nonetheless, Nownes warns of the dangers of unwatched interest group activity, especially in the realms of the electoral process and issue advocacy.

Interest Groups in American Politics, Second Edition, is grounded by the role of information in interest group activity, a theme that runs through the entire book. This much anticipated revision of Nownes’s text retains a student friendly tone and thoroughly updates the references to interest group research, as well as adds a new chapter on the connections between interest groups and political parties. Numerous figures and tables throughout the book help students visualize important trends and information.

Anthony J. Nownes is a professor of political science at the University of Tennessee, Knoxville. He is the author of numerous works on interest group politics at the federal, state, and local level and an award-winning teacher.

"Fresh, funny, and smart. Nownes provides a research-based text on groups and group behavior that will enhance any undergraduate parties and interest groups course."

"Dr. Nownes has written a highly readable text that does a fine job of covering the topic of Interest Groups in the US. It is an excellent choice for an upper-level undergraduate course or for an introductory graduate course. Of special interest to professors and students alike will be the chapter on the non-lobbying activities of interest groups."

"Nownes offers the perfect skeleton for a semester long course on political organizations in the U.S. With a keen eye on the legal environment that governs the formation and activity of interest groups, he masterfully knits together the leading insights of academic research and the popular press."

—Paul Johnson, The University of Kansas

"In Pressure and Power, Anthony Nownes provides broad coverage of the place of interest groups in American politics. Students will walk away from this book far more enlightened on what interest groups are, and why and how they do what they do."

—Mark Brewer, The University of Maine

"Pressure and Power is a must for courses on interest groups. It is a very well-written, accessible book that includes wonderful examples while maintaining a link to the literature."