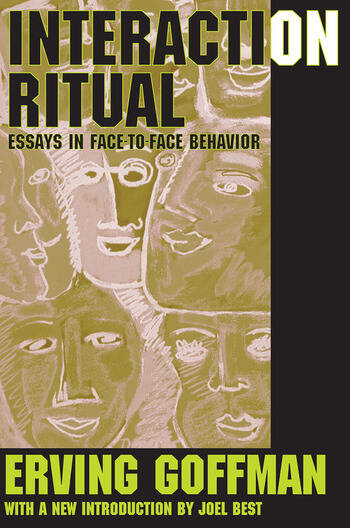 "Not then, men and their moments. Rather, moment and their men," writes Erving Goffman in the introduction to his groundbreaking 1967 Interaction Ritual, a study of face-to-face interaction in natural settings, that class of events which occurs during co-presence and by virtue of co-presence. The ultimate behavioral materials are the glances, gestures, positionings, and verbal statements that people continuously feed into situations, whether intended or not.

A sociology of occasions is here advocated. Social organization is the central theme, but what is organized is the co-mingling of persons and the temporary interactional enterprises that can arise therefrom. A normatively stabilized structure is at issue, a "social gathering," but this is a shifting entity, necessarily evanescent, created by arrivals and killed by departures. The major section of the book is the essay "Where the Action Is," drawing on Goffman's last major ethnographic project observation of Nevada casinos.

Tom Burns says of Goffman's work "The eleven books form a singularly compact body of writing. All his published work was devoted to topics and themes which were closely connected, and the methodology, angles of approach and of course style of writing remained characteristically his own throughout. Interaction Ritual in particular is an interesting account of daily social interaction viewed with a new perspective for the logic of our behavior in such ordinary circumstances as entering a crowded elevator or bus." In his new introduction, Joel Best considers Goffman's work in toto and places Interaction Ritual in that total context as one of Goffman's pivotal works: "His subject matter was unique. In sharp contrast to the natural tendency of many scholars to tackle big, important topics, Goffman was a minimalist, working on a small scale, and concentrating on the most mundane, ordinary social contacts, on everyday life.'"