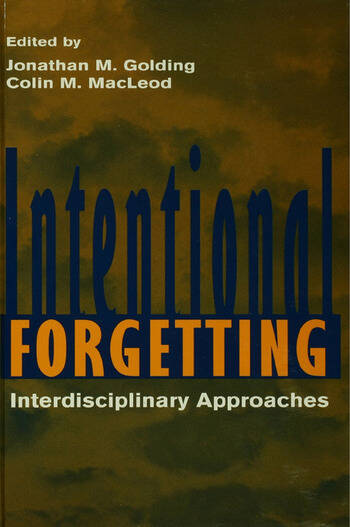 Research on intentional forgetting has been conducted in various forms and under various names for at least 30 years, but until now no effort has been made to present these different perspectives in one place. Comprising both review chapters and new empirical studies, this book brings together the many research paradigms investigating intentional forgetting, thereby highlighting the commonalities that link these seemingly disparate areas of research. It serves as a "case study" of one phenomenon in memory--the intention to forget or to modify memory.

Why is research on intentional forgetting important? It helps to increase the understanding of how memory functions, especially with regard to its updating. In William James' "booming, buzzing confusion," we frequently are unable to adequately process all of the information that we experience; on-line forgetting of some information is necessary. Moreover, we must often replace existing information with new information, as when someone we know relocates and acquires a new address and telephone number. Investigating this updating ability has been the main thrust of research on intentional forgetting, specifically those studies on the directed forgetting phenomenon. Cognitive experiments on directed forgetting have shown that we are able to deal more effectively with large amounts of information by following instructions to treat some of the information as "to be forgotten." In this way, interference is reduced and we are able to devote all of our resources to the remaining to-be-remembered information. The mechanisms that lead to this reduction continue to promote new experiments, but over a quarter century of research maintains that the directed forgetting effect is robust.

"I thouroughtly enjoyed, and greatly benefited from reading this volume. It brings together a wealth of findings, ideas, and directions for future research."
—Canadian Journal of Experimental Psychology

"This is one of the most exciting edited volumes I have seen in many years, and it seems to do a remarkable job in walking the narrow line between excessive breadth and excessive narrowness. The writing of all the chapters is quite clear, and each one should have considerable interest for those of us who are interested in memory....This is one book that psychologists in many subfields should not only try to remember but should also not try to forget."
—Contemporary Psychology