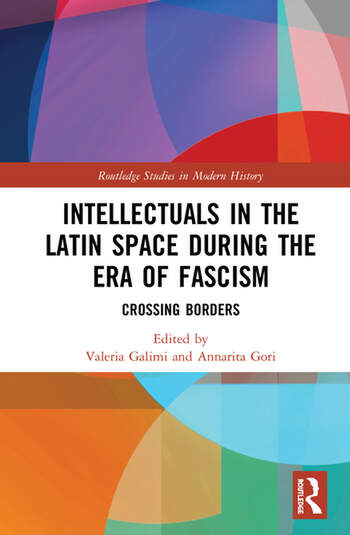 Intellectuals in the Latin Space during the Era of Fascism: Crossing Borders

This volume investigates a galaxy of diverse networks and intellectual actors who engaged in a broad political environment, from conservatism to the most radical right, between the World Wars. Looking beyond fascism, it considers the less-investigated domain of the 'Latin space', which is both geographical and cultural, encompassing countries of both Southern Europe and Latin America.

Focus is given to mid-level civil servants, writers, journalists and artists and important 'transnational agents' as well as the larger intellectual networks to which they belonged. The book poses such questions as: In what way did the intellectuals align national and nationalistic values with the project of creating a 'Republic of Letters' that extended beyond each country’s borders, a 'space' in which one could produce and disseminate thought whose objective was to encourage political action? What kinds of networks did they succeed in establishing in the interwar period? Who were these intellectuals-in-action? What role did they play in their institutions’ and cultural associations’ activities?

A wider and intricate analytical framework emerges, exploring right-wing intellectual agents and their networks, their travels and the circulation of ideas, during the interwar period and on a transatlantic scale, offering an original contribution to the debate on interwar authoritarian regimes and opening new possibilities for research.

2 António Sardinha and his Ibero-American Connections. Traditionalism and Universalism

5 Plínio Salgado between Brazil and Portugal. Formation and Transformation of Brazilian Integralism

7 Les amis étrangers. Maurrassian Circles and a French Perspective on the Latin space during the Thirties

8 Atlantic Crossings. Intellectual-Politicians and the Diffusion of Corporatism in the Thirties Latin America

9 Local and Global Connexions of Argentine, Uruguayian and Chilean Fascists in the Thirties and Early Forties

Valeria Galimi is tenure-track Assistant Professor at the University of Florence, Italy. She has been a visiting scholar and professor in France, Israel and the United States. Her interests are on the history of French intellectuals during the interwar period, the history of European anti-Semitism, fascism and the Second World War.

is Research Fellow at the Institute of Social Sciences, University of Lisbon, Portugal. Her work focuses on right-wing intellectual networks in the interwar period, cultural propaganda and pan-Latinism. She was visiting scholar at New York University (2015) and Science Po (2016). During Spring 2020, she will be a visiting professor at Brown University.

Intellectuals in the Latin Space during the Era of Fascism: Crossing Borders