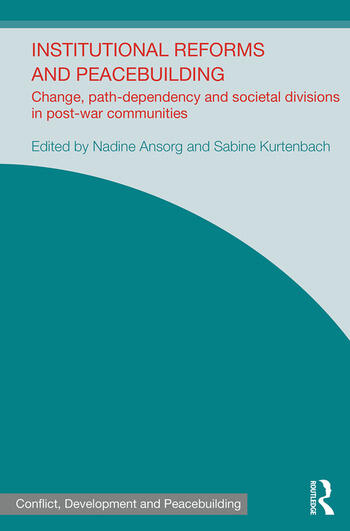 This book deals with the question how institutional reform can contribute to peacebuilding in post-war and divided societies.

In the context of armed conflict and widespread violence, two important questions shape political agendas inside and outside the affected societies: How can we stop the violence? And how can we prevent its recurrence? Comprehensive negotiated war terminations and peace accords recommend a set of mechanisms to bring an end to war and establish peace, including institutional reforms that promote democratization and state building. Although the role of institutions is widely recognized, their specific effects are highly contested in research as well as in practice. This book highlights the necessity to include path-dependency, pre-conflict institutions and societal divisions to understand the patterns of institutional change in post-war societies and the ongoing risk of civil war recurrence. It focuses on the general question of how institutional reform contributes to the establishment of peace in post-war societies. This book comprises three separate but interrelated parts on the relation between institutions and societal divisions, on institutional reform and on security sector reform. The chapters contribute to the understanding of the relationship between societal cleavages, pre-conflict institutions, path dependency, and institutional reform.

This book will be of much interest to students of peacebuilding, conflict resolution, development studies, security studies and IR.

Part I: Divisions, Societal Cleavages and Institutional Reforms in the Aftermath of War

1. Does the Success of Institutional Reform Depend on the Depth of Divisions? A Pilot Study on Thirty-Four African Countries, Matthias Basedau

2. Matches and Misfits: Divided Societies and the Adoption of Power-Sharing, Gerald Schneider

Part II: Path Dependency of Institutional Designs During and After War

4. The Challenges of Institutional Reforms in the Midst of War: Lessons from Colombia, Sabine Kurtenbach

9. Looking beyond Institutional Reform: Engaging with the Hybridization of Peace and Political Order. Two Cases from Oceania and West Africa, Volker Boege

is a Political Scientist and Senior Research Fellow at the GIGA German Institute of Global Area Studies, Germany.