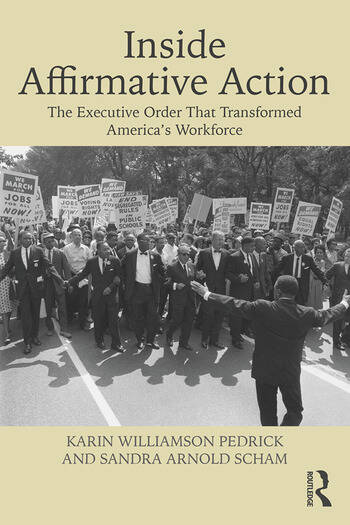 Inside Affirmative Action: The Executive Order That Transformed America's Workforce

Affirmative action is still a reality of the American workplace. How is it that such a controversial Federal program has managed to endure for more than five decades? Inside Affirmative Action addresses this question.

Beyond the usual ideological debate and discussions about the effects of affirmative action for either good or ill upon issues of race and gender in employment, this book recounts and analyzes interviews with people who worked in the program within the government including political appointees. The interviews and their historical context provide understanding and insight into the policies and politics of affirmative action and its role in advancing civil rights in America.

Recent books published on affirmative action address university admissions, but very few of them ever mention Executive Order 11246 or its enforcement by an agency within the Department of Labor - let alone discuss in depth the profound workplace diversity it has created or the employment opportunities it has generated. This book charts that history through the eyes of those who experienced it. Inside Affirmative Action will be of interest to those who study American race relations, policy, history and law.

Foreword: Who, What and When

Part 1: Inside and Outside Affirmative Action

2. The Debate Outside Affirmative Action

Part 2: The Making of Affirmative Action

7. In Pursuit of a Colorblind Society: Reagan's Second Term

Part 4: Four Presidents and the Legacy of a Program

11. From Seneca Falls to Selma to Stonewall: Barack Obama

12. Diversity in a Time of Division: Donald Trump

Karin Williamson Pedrick has broad experience enforcing federal laws and regulations at the U.S. Department of Labor and the U.S. Equal Employment Opportunity Commission (EEOC). Her career includes 35 years at the Department of Labor - 7 years working at the Employment and Training Administration in the Labor Certification Program, 4 years at the Wage and Hour Division enforcing the Equal Pay Act and the Age Discrimination in Employment Act; 24 years at the Office of Federal Contract Compliance Programs enforcing several discrimination laws and Executive Order 11246, which prohibits employment discrimination and requires contractors to take affirmative action to ensure equal opportunity; and 7 years at EEOC where she was the Executive Assistant to the Chair for five years and Deputy Director of the Office of Communications and Legislative Affairs for 2 years. EEOC enforces several federal employment discrimination laws including Title VII of the Civil Rights Act and Title I of the Americans with Disabilities Act. Ms. Pedrick has a bachelor of arts degree in Political Science from the George Washington University in Washington, D.C.

is a consultant to the United States Department of State and the United States Agency for International Development on social science research and counter extremism. Before pursuing her PhD, she worked for the government in the field of equal employment opportunity and labor law for twenty-five years. She is an Adjunct Associate Professor in the Anthropology Department of the Catholic University of America in Washington, DC and has held research, teaching and editorial posts at Stanford University, Pennsylvania State University and the University of Maryland. She is the co-editor of an academic journal and has been an editor and contributing editor for two other academic journals. She is widely published in the fields of anthropology, cultural heritage and international development.

'Here, at last, is the definitive work on Executive Order 11246. Written from the perspectives of two career Federal civil servants, Inside Affirmative Action presents an unbiased, yet committed, view of the enforcement of contract compliance by the Federal Government. Karin Williamson Pedrick and Sandra Arnold Scham have done a superb job of chronicling the history and potentially tenuous future of Executive Order 11246. This is a book that should be required reading for everyone who has an interest in federal contract compliance to promote and advance equal employment opportunity and affirmative action in American society.'

'Karin Williamson Pedrick and Sandra Arnold Scham present a detailed and intuitive description of the evolution of affirmative action and the agency created to administer it in the employment context. It has often been said in the context of federal initiatives that "personnel is policy" and Pedrick and Scham illustrate the key role played by the individuals charged with interpreting and enforcing affirmative action. Both politically appointed and career civil servants have shaped the evolution of affirmative action and made it a critical and enduring feature of American life. Pedrick and Scham describe the fascinating interplay between proponents and opponents and the policy and bureaucratic battles engaged in over the decades. For those interested in understanding "how the sausage is really made," Inside Affirmative Action will present a front row seat as to how a critical component of American life was conceived, given substance and then implemented.'

'OFCCP, Executive Order 11246, and Affirmative Action Goals and Timetables may be unfamiliar if you don’t work for a major Government contractor. Inside Affirmative Action sheds light on these obscurities, and reveals how they helped to end black jobs and female jobs in the last half of the 20th Century and, for the first time, to include women and African Americans in the mainstream workforce. In this well-researched and readable volume, the authors juxtapose relevant and contextual historical data to tell the story of sex and race-based employment discrimination and its decline in America.'

Inside Affirmative Action: The Executive Order That Transformed America's Workforce