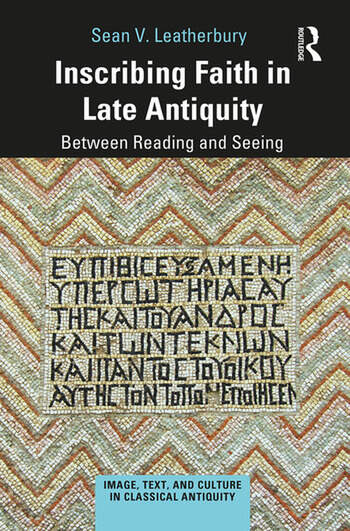 Inscribing Faith in Late Antiquity: Between Reading and Seeing

Inscribing Faith in Late Antiquity considers the Greek and Latin texts inscribed in churches and chapels in the late antique Mediterranean (c. 300–800 CE), compares them to similar texts from pagan, Jewish, and Muslim spaces of worship, and explores how they functioned both textually and visually.

These texts not only recorded the names and prayers of the faithful, but were powerful verbal and visual statements of cultural values and religious beliefs, conveying meaning through their words as well as through their appearances. In fact, the two were intimately connected. All of these texts – Christian, Jewish, Muslim, and pagan – acted visually, embracing their own materiality as mosaic, paint, or carved stone. Colourful and artfully arranged, the inscriptions framed human relationships with the divine, encouraged responses from readers, and made prayers material. In the first in-depth examination of the inscriptions as words and as images, the author reimagines the range of aesthetic, cultural, and religious experiences that were possible in spaces of worship.

is essential reading for those interested in Roman, late antique, and Byzantine material and visual culture, inscriptions and other texts, and religious life in the ancient Mediterranean.

Writing and reading in the temple

The colors and surfaces of texts

Colorful texts and their contexts

Texts in (and of) pieces

For the love of materials

Framing texts in the Roman world: The tabula ansata

Tabulae from sculpture to mosaic

Ekphrasis on the move

The origins and functions of Christian "titles"

Tituli on and off the page

Tituli in the east

From scroll to book

Prayer in the late antique world

Motives and modes of prayer

Sanctifying the interior, part by part

Prayers for the faithful

Sean V. Leatherbury is Assistant Professor of Art History at Bowling Green State University, USA, and Research Associate of the European Research Council-funded project Monumental Art of the Christian and Early Islamic East, based in the Faculty of Classics at the University of Oxford, UK. His research focuses on Roman and late antique visual and material culture, and examines the relationship between art and text, issues of identity, and the transformation of the so-called minor arts from the Roman to the Byzantine period. His work has been supported by fellowships from the Getty Research Institute, USA, the Bard Graduate Center, USA, and the Council for British Research in the Levant, UK, and by funding from the Association for the Study and Preservation of Roman Mosaics, UK, and the Oxford Centre for Byzantine Research, UK. Currently, he is completing a monograph on the late antique floor mosaics of Syria and co-editing a volume on late antique art and local identities.

Inscribing Faith in Late Antiquity: Between Reading and Seeing