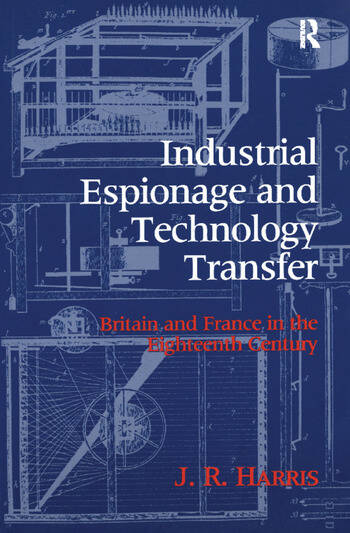 Industrial Espionage and Technology Transfer: Britain and France in the 18th Century

Britain and France were the leading industrial nations in 18th-century Europe. This book examines the rivalry which existed between the two nations and the methods used by France to obtain the skilled manpower and technology which had given Britain the edge - particularly in the new coal-based technologies. Despite the British Act of 1719 which outlawed industrial espionage and technology transfer, France continued to bring key industrial workers from Britain and to acquire British machinery and production methods. Drawing on a mass of unpublished archival material, this book investigates the nature and application of British laws and the involvement of some major British industrialists in these issues, and discusses the extent to which French espionage had any real success. In the process it presents an in-depth understanding of 18th-century economies, and the cultures and bureaucracies which were so important in shaping economic life. Above all, the late John Harris saw the history of industrial espionage as ’one means of restoring the thoughts and activities of human beings to the centre stage of industrial history’. These are the stories of individuals - Holkers, Trudaines, Wilkinsons, or Milnes - and their impact on the world.

Contents: Introduction; Part One: The First Legislation: Causes and Implementation: John Law the suborning of British workers, and Legislation against industrial espionage; After the first legislation: emigration and intelligence; Part Two: Holkers and Trudaines: John Holker and his patron; Holker, Kay and Badger; Other industrial ventures: textiles and vitriol; The successful 1770s: John Holker II, tours and reports; The difficulties of the 1780s; Part Three: Metals and Arms: The hardware industry; Steel; The metallurgical traveller; Attacks on the problem of coke iron: jars to Wilkinson; A tale of two navies: copper sheathing; Part Four: Two Other industries: Steam Power and Glass: The steam engine in France: Newcomen and Watt; Glass; Part Five: The Transfer of British Textile Technology in the Late Eighteenth Century: The arrival of the water frame and the mule; Further textile espionage and the efforts of the bureau of commerce; Part Six: French Espionage in Eighteenth-Century Britain: An Appraisal: A case study in espionage: eccentric and engineer - an industrial spy of the 1780s; Laws, actions and attitudes in Britain; The views of great industrialists; Comparisons I: Industrial espionage in Britain, France and other nations; Comparisons II: The balance of transfer between Britain and France; French industrial espionage in Eighteenth-century Britain and technology transfer: an evaluation; Bibliography; Index.

'It is rarely that a work of history can be called "definitive" - or almost so, but this monumental book fully deserves this designation.' from foreword by FranÃ§ois Crouzet 'The archival material it contains is unique and the story it tells...is both intrinsically important and fascinating in the detail' Peter Mathias 'a painstakingly thorough exploration of industrial transfer between France and Britain from 1710 to 1800.' Choice 'This is a major achievement not to be ignored by historians of technology or business in the 18th century.' Business History 'Firmly based on a multitude of archival and printed sources in France, Britain and the United States, Industrial Espionage and Technology Transfer provides an excellent account of English legislation, case studies of targeted industries and inventions, and surveys of British entrepreneurs’ attitudes, along with brief summaries of attempted and actual spying....' Labor History '...extremely well-researched and a pleasure to read...can therefore be recommended not only to the specialist but also to the interested general reader...Harris’ book is the legacy of a true scholar....' Archives Internationales d’Histoire des Sciences 'Even before publication this work was recognized as a masterpiece by those best qualified to judge, namely, FranÃ§ois Crouzet and Peter Mathias. Their verdict will be endorsed by all who are fortunate enough to read it. Its subject is important and its approach persuasive...excellent...This work will remain a permanent memorial to a scholar of profound learning and genuine modesty. It transforms our understanding of the Industrial Revolution and will influence both teaching and research far into the future... indispensable to all who are interested in the history of technology, science, economic development, and Britain’s relations with the wider world.' Technology and Culture '...a delight to handle and read...a definitive and monumental work ... a combination of large a

Industrial Espionage and Technology Transfer: Britain and France in the 18th Century