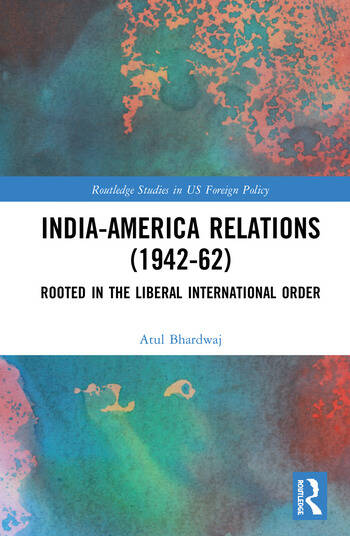 Examining India-America relations between 1942-62, this book reconsiders the role of America in shaping the imagination of post-colonial India. It rejects a conventional orthodoxy that assigns a limited role to America and challenges narratives which neglect the natural asymmetries and focus on discord and differences to define India-America relations.

Integrating the security, political and economic elements of the Indo-American relationship it presents a synthesis of India’s encounter with the post-war hegemon and looks at the military, economic and political involvement of America during the ‘transfer of power’ from Britain to India. Bhardwaj delves into the role of American non-government agencies and examines the anti-communist ideological linkages that the Indian political class developed with America, the influence of this bonding and the role of American ideas, experts, funds, international relations and strategy in shaping India’s social, economic and educational institutions. Analyzing India’s non-alignment policy and its linkages to American policy on the non-communist neutrals, it argues that India’s movement towards the Soviet Union and away from China in the mid 1950s was in tune with the American strategy to cause the Sino-Soviet split.

The book presents a fresh perspective based on authentic records and adds a new dimension to the understanding of modern Indian history and Indo-American relations. It will appeal to scholars and students of Indian and American history, international relations and strategy.

The American Century and India

The British Invite America to India

In Awe of America

Networking with the Indian Elite

The Economics of War

The Liberterian Returns from Brussels

JP Narayan, the Most Trusted Ally of America

The Postwar Philanthropy in India

The American Institute of Indian Studies

Why no FCN Treaty for India?

The Myth of Rift

Chapter 6- From Tibet Towards War

India’s not alone in recognizing China

Why Nehru did not intervene in Tibet

Non-Alignment and the Sino-Soviet Split

America and India’s Relations with the Soviet Union

Coming Closer to the Soviets for Domestic Political Reasons

The War and the Sino- Soviet Split

Atul Bhardwaj is a strategic affairs and international affairs analyst. He writes a regular column on strategy in Economic and Political Weekly. He is currently an Adjunct Fellow with the Institute of Chinese Studies (ICS), New Delhi. He has a Ph.D. in history from Ambedkar University, Delhi. He is a former Indian Navy officer, holds a graduate degree from National Defence Academy (NDA) Pune and a master’s degree in war studies from King’s College, London. He has been a Senior Fellow, Indian Council of Social Science Research and Research Fellow at the Institute of Defence Studies and Analyses New Delhi.