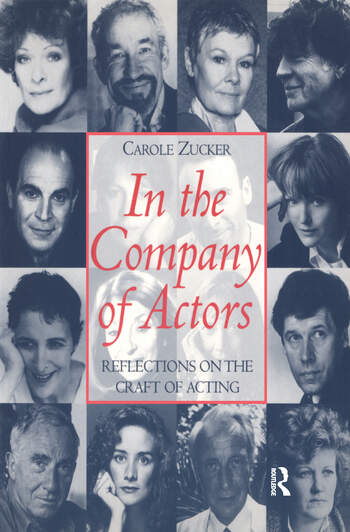 In the Company of Actors: Reflections on the Craft of Acting

Carole Zucker is Professor of Film Studies at Concordia University in Montreal. Her previous books include The Idea of the Image: Josef von Sternberg's Dietrich Films, Making Visible the Invisible: An Anthology of Original Essays on Film Acting and Figures of Light: Actors and Directors Illuminate the Art of Film Acting. She teaches private acting workshops in Montreal.

"Carole Zucker's conversations with 16 leading lights of the British stage, collected between the covers of In the Company of Actors... will interest aspiring performers and theater buffs... [F]un to read." -- New York Blade News and The Washington Blade
"[A great] use to serious students of acting." -- American Theatre
"Simon Callow, interviewed by Carole Zucker, laments that "most critics" are ignorant "of the processes of the theater." For critics and ordinary spectators, Zucker's In the Company of Actors is an easy-to-swallow antidote to Callow's complaint." -- Stagebill--Washinton, D.C.
"These sixteen chats with the masters will prove illuminating not just to actors but to anyone with a passion for the theatre or film...[Zucker] has elicited all kinds of extraordinary response from them, a great flow of extemporaneous expression, and ultimately a richly impressionistic portrait of the actor's imagination." -- Montreal Review of Books
"This book is a remarkable achievement... This volume belongs in all college and university library collections, where it will serve both undergraduate and graduate students. A splendid accomplishment; highly recommended." -- Choice
"Lively and thoughtful, Zucker askes all the right questions of her subjects... ...a must-read for cinephiles..." -- Mirror
"[It] is filled with delicious disclosures... What makes IN THE COMPANY OF ACTORS not just dazzling, but truly illuminating are the fine minds at work here. Acting is something these actors have spent no only a great deal of time doing, but a great deal of time thinking about. And we can be thankful to have a book like IN THE COMPANY OF ACTORS that does such wonderful justice to actors and the acting life." -- The Montreal Gazette
"A testament to her prowess as an editor and researcher, Zucker is equally present and absent in the text, letting each actor take center stage in a smooth narrative undisrupted by questions. It's an unmitigated delight to read the insights, rants, and kvetchings of some of the brightest stars in the English-speaking theatrical firmament." -- Library Journal

In the Company of Actors: Reflections on the Craft of Acting