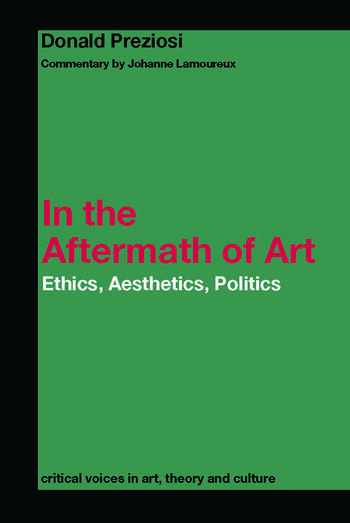 In the Aftermath of Art: Ethics, Aesthetics, Politics

By juxtaposing issues and problems, Donald Preziosi's latest collection of essays, In the Aftermath of Art, opens up multiple interpretive possibilities by bringing to the surface hidden resonances in the implications of each text.

In re-reading his own writings, Preziosi opens up alternatives to contemporary discourses on art history and visual culture. A critical commentary by critic, historian, and theorist Johanne Lamoureux complements the author's own introduction, mirroring the multiple interpretations within the essays themselves.

Professor Donald Preziosi was trained in Art History, Linguistics, and Classical Archaeology at Harvard University and has taught at several American Universities, including Yale, M.I.T., and UCLA. In 2000-2001 he was Slade Professor of Fine Art at Oxford, and his Slade Lectures were published under the title Brain of the Earth's Body: Art, Museums, and the Phantasms of Modernity (Minnesota, 2003). He has published widely on the historiography of the discipline of art history (Rethinking Art History: Meditations on a Coy Science (Yale, 1989), The Art of Art History (Oxford, 1998); on museology (Grasping the World: The Idea of the Museum, jointly with Claire Farago (Ashgate, 2004); and on ancient art (Aegean Art & Architecture (Oxford, 1999).

Johanne Lamoreux is a writer, critic and art historian who lives in Montréal. She received her Ph.D. in art history in 1990 and has been a professor since then in the art history department at l'Université de Montréal. A founding member of La Societé d'esthétique du Québec, she has served on the boards of several periodicals and is a regular contributor to exhibition catalogues, journals and periodicals.

In the Aftermath of Art: Ethics, Aesthetics, Politics