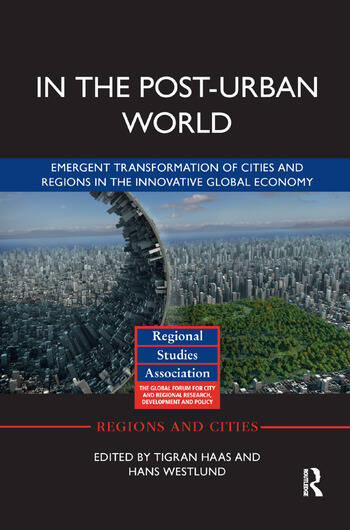 In The Post-Urban World: Emergent Transformation of Cities and Regions in the Innovative Global Economy

In the last few decades, many global cities and towns have experienced unprecedented economic, social, and spatial structural change. Today, we find ourselves at the juncture between entering a post-urban and a post-political world, both presenting new challenges to our metropolitan regions, municipalities, and cities. Many megacities, declining regions and towns are experiencing an increase in the number of complex problems regarding internal relationships, governance, and external connections. In particular, a growing disparity exists between citizens that are socially excluded within declining physical and economic realms and those situated in thriving geographic areas. This book conveys how forces of structural change shape the urban landscape.

In The Post-Urban World

is divided into three main sections: Spatial Transformations and the New Geography of Cities and Regions; Urbanization, Knowledge Economies, and Social Structuration; and New Cultures in a Post-Political and Post-Resilient World. One important subject covered in this book, in addition to the spatial and economic forces that shape our regions, cities, and neighbourhoods, is the social, cultural, ecological, and psychological aspects which are also critically involved. Additionally, the urban transformation occurring throughout cities is thoroughly discussed. Written by today’s leading experts in urban studies, this book discusses subjects from different theoretical standpoints, as well as various methodological approaches and perspectives; this is alongside the challenges and new solutions for cities and regions in an interconnected world of global economies.

This book is aimed at both academic researchers interested in regional development, economic geography and urban studies, as well as practitioners and policy makers in urban development.

PART I: Spatial Transformations and New Geographies of Cities and Regions

1. Edward Glaeser – Urban Transformations and the Future of Cities

4. Michael Batty – Cities as Systems of Networks and Flows

14. Fran Tonkiss – Commodity or commons? Knowledge, inequality and the city

PART III: Emerging Cultures in a Post-political and Post-urban World

Tigran Haas is Associate Professor of Urban Planning and Urban Design at KTH Royal Institute of Technology, Stockholm, Sweden, and Director of the Centre for the Future of Places (CFP) at KTH.

In The Post-Urban World: Emergent Transformation of Cities and Regions in the Innovative Global Economy