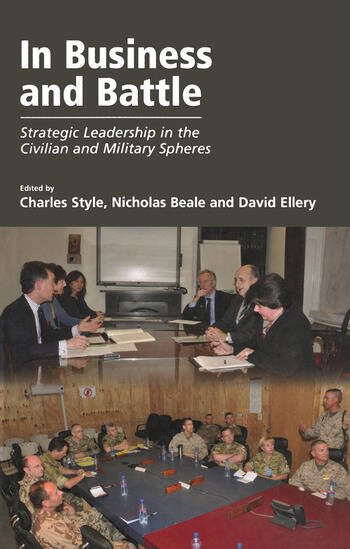 In Business and Battle: Strategic Leadership in the Civilian and Military Spheres

The UK's Royal College of Defence Studies (RCDS) annual programme unites senior personnel from around the world who are preparing for the highest responsibilities in civilian and military spheres. Each year, representatives of some fifty countries share on average over a thousand years of experience in some of the most complex and demanding environments on earth. In Business and Battle is the synthesis of the expert analysis and experience of participants in that programme, tested and sharpened by extensive international field work and coupled with contributions by first-rate presenters external to the programme. It deals with strategy and top level strategic leadership together and views them from multinational, multicultural and multisectoral perspectives. In so doing, it pushes the boundaries beyond a mere description of commercial, civilian and military strategic environments; it provides extensive and deep insights into how to interpret and shape those environments.

Vice-Admiral Charles Style was until spring 2012 the Commandant of The Royal College of Defence Studies, London. A Cambridge graduate, his sea commands included five ships culminating with the aircraft-carrier and fleet flagship HMS Illustrious, followed by flag command of the UK Maritime Force, and the maritime element of the NATO Response Force. As Deputy Chief of Defence Staff (Commitments) in the Ministry of Defence, he was Director of UK Military Operations, and ran the Defence Crisis Management Organisation. These and other roles have engaged him in leadership, strategy and capability development both nationally and much further afield. He is an Executive-in-Residence at the Manchester Business School, and has established a business providing international strategic advice, consultancy and leadership development. Nicholas Beale is a strategy consultant and Chairman of Sciteb, a firm that provides innovative thinking to top management both in developing their strategies and their boards. He is known internationally for fundamental new thinking on systemic risk, and has given seminars at Harvard, Oxford, LSE Tsinghua and Renmin Universities as well as to central banks and regulators in the US, Europe and China. His work has been featured in the FT, WSJ, HBR, Nature and PNAS. He is a Fellow of the Institute of Mathematics and its Applications (IMA), the RSA and the Royal Institution, a Freeman of the City of London and a Liveryman of the Worshipful Company of Information Technologists. David Ellery is a Foreign Office official with extensive first-hand experience of strategic policy-making and its implementation at the national and international level. He is also Senior Directing Staff Emeritus at the Royal College of Defence Studies (where his recent work on India and China as emerging global powers has been published) and is a Fellow and Trustee in the University of Durham, where, as a member of Van Mildert College, he graduated with a Double Honours degree and a distinction.

A Baker & Taylor Academic Essentials Title in Leadership 'There has never been a better time for the publication of this book. All current and aspiring top strategic leaders should read it - whatever their field, whatever their experience and expertise. I commend it unreservedly and with enthusiasm.' The Rt Hon Lord Patten of Barnes CH 'Good to see the emphasis on communication in this incisive book on strategic leadership...' Sir Harold Evans ’In Business and Battle is an earnest and enduring book that synthesises the inputs and thoughts of the RCDS class of 2009. It is a useful compendium for defence professionals seeking insights into the nexus between strategic leadership in business and in the military. In short, excellent strategic leadership is rare in both activities. The book gives useful examples of how strategic leaders in business and war, including Nelson Mandela, General Sir David Richards and General David Petraeus, have made good and bad decisions for their organisations. Perhaps Australia’s CDSS could approach a similar project on strategic leadership, either independently, or in collaboration with RCDS. The result may continue to enhance strategic thinking for future leaders in Australia and beyond.’ Australian Defence Force Journal, February 2013

In Business and Battle: Strategic Leadership in the Civilian and Military Spheres