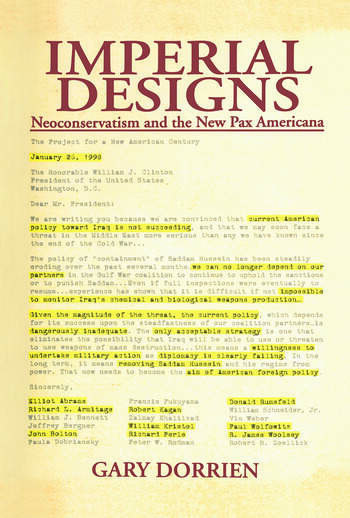 This work argues that the influence of neoconservatives has been none too small and all too important in the shaping of this monumental doctrine and historic moment in American foreign policy. Through a fascinating account of the central figures in the neoconservative movement and their push for war with Iraq, he reveals the imperial designs that have guided them in their quest for the establishment of a global Pax Americana.

Gary Dorrien is the Parfet Distinguished Professor at Kalamazoo College. An Episcopal priest, he is the author of eleven books and over one hundred articles that range across the fields of theology, philosophy, social theory, politics, ethics, and history. His recent two volumes, The Making of American Liberal Theology, have been lauded by numerous reviewers as the definitive study of American theological liberalism.

"Conservatives used to warn us about the dangers of utopianism: of the unintended consequences of hubristic attempts to "socially engineer" brave new worlds conjured in the heads of intellectuals. Now Americans are once again learning that lesson, but the perpetrators are...conservatives. Gary Dorrien's guidebook to the men and women who dreamed up our Iraq misadventure is deeply informed, deeply penetrating, and, above all, deeply moral
." -- Rick Perlstein, author, Before the Storm: Barry Goldwater and the Unmaking of the American Consensus
"Did neoconservative intellectuals help lead us to war in Iraq? Gary Dorrien's probing, stimulating book helps us answer this question once and for all. Imperial Designs in brilliant and timely
." -- John Patrick Diggins, Distinguished Professor of History and author of Up from Communism
"The imperial ambitions of G.W. Bush's foreign policy did not originate like a thunderclap from the tragedy of 9/11, but were sown years before in the grandiose thinking of neoconservative policy thinkers. They called themselves realists but, once in power, turned out to be deeply destructive fabulists. Gary Dorrien tells this important story with a sober, judicious brilliance that contrasts starkly with the men who are his subject. Understanding the depth of their illusions is an essential first step toward righting the nation." -- William Greider, author of The Soul of Capitalism: Opening Paths to a Moral Economy
"Imperial Designs is an intellectually sophisticated study of the neoconservative ideologues who have seized control of U.S. foreign policy. Extensively researched and carefully argued, it provides a brilliant portrait of their background and ideas, as well as a call for a liberal internationalist alternative." -- Lawrence S. Wittner, Professor of History, SUNY-Albany and author of The Struggle Against the Bomb
"With cool analysis and astonishing, comprehensive documentation of the neoconservative takeover of current American foreign policy, Dorrien lays out the danger to our own national self-interest of 'empire heightened by ideological ardor.' It's a remarkable book. Regardless of who wins the elections of 2004, this book will provide any reader with urgent reason to say to fellow Americans and our leaders: 'Cease the arrogance. Stop acting as if America's role in the world is to rule it.'." -- Donald W. Shriver, Jr., President Emeritus, Union Theological Seminary in New York
"In Imperial Designs: Neoconservatism and the New Pax Americana, U.S. Episcopal priest and religion scholar Gary Dorrien tells it well, in a narrative at once chatty, fair-minded and painstakingly well-informed, personalized by biographical vignettes in which the Straussians and their academic connections frequently figure
." -- Toronto Globe & Mail
"Dorrien offers a much more careful and detailed critique of the neoconservatives than that often found in major media outlets and the publications of the American Left...This work...offers a thorough, unsympathetic, and disputable critique of this influtential group of American political activists." -- Perspectives on Political Science
"...a prolific author whose writings include two volumes in an acclaimed series on American liberal Christianity and a decade-old book on neoeonservative ideology, thoroughly rehearses the movement of the ideas and people operating the U.S. foreign policy machinery. In an astonishingly comprehensive discussion of the neoconservatives' rise to power, Dorrien identifies the major players who devised the grand strategy of unipolarism, which calls for America to assert itself as the preeminent global power in the post-Cold War world..." -- The Christian Century