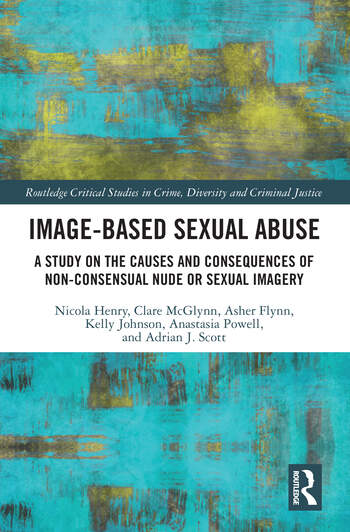 Image-based sexual abuse: A study on the causes and consequences of non-consensual nude or sexual imagery

This book investigates the causes and consequences of image-based sexual abuse in a digital era. Image-based sexual abuse refers to the taking or sharing of nude or sexual photographs or videos of another person without their consent. It includes a diversity of behaviours beyond that of "revenge porn", such as blackmail or "sextortion" scams; the use of artificial intelligence to construct "deepfake" pornographic videos; and the taking or sharing of sexual assault imagery. This book investigates the pervasiveness and experiences of these harms, as well as the raft of legal and non-legal measures that have been introduced to better respond to and prevent image-based sexual abuse.

The book draws on ground-breaking empirical research, including surveys in three countries with over 6,000 respondents and over 100 victim-survivor and stakeholder interviews. Guided by theoretical frameworks such as gender studies, sociology, criminology, law and psychology, the authors argue that image-based sexual abuse is more commonly perpetrated by men than women, and perpetration is higher among some groups, including younger men and sexuality minority men. The motivations of perpetrators varied, and yet a dominant theme to emerge was that of power and control. The gendered nature of the abuse means that it is best understood as a "continuum of sexual violence" because victim-survivors often experience it as part of a broader pattern of gendered harassment, violence and abuse.

Written in a clear and direct style, this book will appeal to students and scholars of criminology, sociology, law and psychology. Image-based sexual abuse is also an essential resource for activists, legal and policy practitioners, technology companies and victim-survivors seeking to understand the deeply complex nature of intimate-image sharing in a digital era.

Nicola Henry an Associate Professor and Vice-Chancellor’s Principal Research Fellow in the Social and Global Studies Centre at RMIT University (Melbourne Australia). Her current research on image-based sexual abuse has helped to shape the development of new criminal and civil laws in Australia.

QC (Hon) is a Professor of Law at Durham University (UK), whose research and collaborations with politicians, policy-makers and the voluntary sector has shaped new laws relating to pornography, sexual violence and image-based sexual abuse.

is an Associate Professor of Criminology & Justice Studies at RMIT University (Melbourne, Australia). She is the author of several books addressing both technology and sexual violence including: Digital Criminology (2019), and Sex, Power and Consent (2010).

is a Senior Lecturer at Goldsmiths, University of London (UK), where he is a member of the Forensic Psychology Unit and the Co-Director of an accredited MSc programme in Forensic Psychology. He has a broad interest in forensic psychology, specialising in the areas of stalking and image-based sexual abuse.

is an Assistant Professor of Criminology at Durham University (UK). Her research focuses on sexual and domestic violence, particularly in areas related to image-based sexual abuse and policing.

is an Associate Professor of Criminology at Monash University (Melbourne, Australia). Informed by national and international context, her research is interested in how people experience and access justice, and developing innovative legal and non-legal responses to violence and abuse in a world increasingly dominated by digital technology.

This book is essential reading for students, researchers, teachers, practitioners, and policy makers seeking a rich social scientific understanding of image-based sexual abuse. It is destined to become a classic piece of scholarship that significantly advances the study of the ways in which new technologies are used by men to abuse women.

This book draws on original survey and interview data to provide a compelling account of how ‘new’ forms of abuse confront us yet again with the familiar challenges stemming from living in a world still shaped by gendered and patriarchal legacies.

Image-based sexual abuse: A study on the causes and consequences of non-consensual nude or sexual imagery