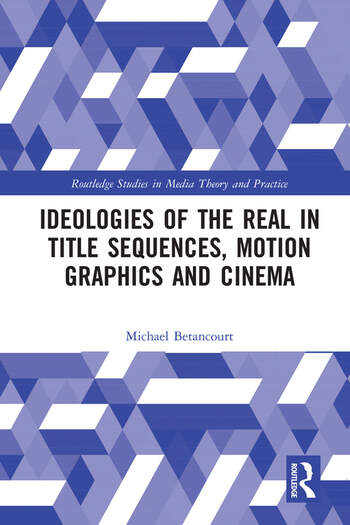 This book explores the question of realism in motion pictures. Specifically, it explores how understanding the role of realism in the history of title sequences in film can illuminate discussions raised by the advent of digital cinema.

fills a critical and theoretical void in the existing literature on motion graphics. Developed from careful analysis of André Bazin, Stanley Cavell, and Giles Deleuze’s approaches to cinematic realism, this analysis uses title sequences to engage the interface between narrative and non-narrative media to consider cinematic realism in depth through highly detailed close readings of the title sequences for Bullitt (1968), Kolchak: The Night Stalker (1974), The Number 23 (2007), The Kingdom (2008), Blade Runner: 2049 (2017) and the James Bond films. From this critique, author Michael Betancourt develops a modal approach to cinematic realism where ontology is irrelevant to indexicality. His analysis shows the continuity between historical analogue film and contemporary digital motion pictures by developing a framework for rethinking how realism shapes interpretation.

Michael Betancourt is a research artist/theorist concerned with digital technology and capitalist ideology. His writing has been translated into Chinese, French, German, Greek, Italian, Persian, Portuguese, and Spanish, and published in journals such as The Atlantic, Make Magazine, CTheory, and Leonardo. He is the author of The ____________ Manifesto, and books such as The History of Motion Graphics and The Critique of Digital Capitalism, as well as three books on the semiotics of motion graphics: Semiotics and Title Sequences, Synchronization and Title Sequences, and Title Sequences as Paratexts. These publications complement his movies, which have screened internationally at the Black Maria Film Festival, Art Basel Miami Beach, Contemporary Art Ruhr, Athens Video Art Festival, Festival des Cinemas Differents de Paris, Anthology Film Archives, Millennium Film Workshop, the San Francisco Cinematheque’s Crossroads, and Experiments in Cinema, among many others.