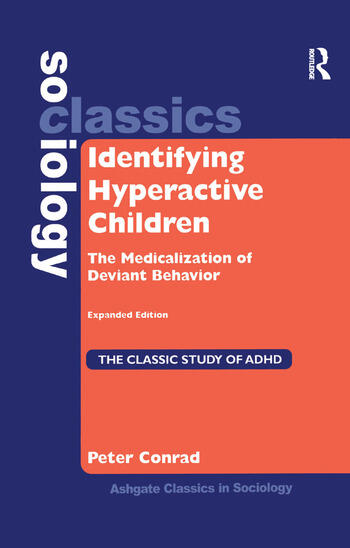 This is a new and expanded edition of a classic case-study in the medicalization of ADHD, originally published in 1976. The book centres on an empirical study of the process of identifying hyperactive children, providing a perceptive and accessible introduction to the concepts and issues involved. In this revised edition, Peter Conrad sets the original study in context, demonstrating the continuing relevance of his research. He highlights the issues at stake, outlining recent changes in our understanding of ADHD and reviewing recent sociological research. Peter Conrad is Harry Coplan Professor of Social Sciences at Brandeis University, USA. He has written extensively in the area of medical sociology, publishing nine books and over eighty articles and chapters.

Contents: Series Editor's Preface; Introduction to the expanded edition; Foreword to the original edition, Mark A. Stewart; Preface to the original edition; Introduction: sociology, illness, and deviant behavior; The discovery of Hyperkinesis; Methodology; The setting and the sample; Identifying behavior as deviant and defining deviance as a medical problem: audience reactions to children's behavior; The social construction of hyperactivity: uncertainty and medical diagnosis; The medicalization of deviant behavior; Toward a social system approach to hyperactivity: situational hyperactivity; Clinic outcomes, conclusions, and areas for further research; Epilogue: a theory of the medicalization of deviant behavior; Epilogue 2000: from hyperactive children to ADHD adults: observations on the expansion of medical categories, Peter Conrad and Deborah Potter; Appendices; References; Index.

Peter Conrad is Harry Coplan Professor of Social Sciences at Brandeis University, USA. He has written extensively in the area of medical sociology, and published over eighty articles and chapters and nine books.

’Peter Conrad's Identifying Hyperactive Children is at the same time a classic study of the labelling of deviant behaviour and a prescient view of what has since become a major social problem. It remains the best sociological analysis of hyperactivity. Its reissue with an informative introduction and recent paper on adult ADHD is welcome news for the sociology of deviance and social control.’ Allan Horwitz, Rutgers University, USA ’This book is a classic work in medical sociology. It served as a jumping-off point for Peter Conrad's development of the theory of medicalization, which has been central to medical sociology, and increasingly to medicine and other fields. It is fitting that one of the senior scholars in medical sociology can revisit the work that began his career, and show us how incredibly relevant it is three decades later. Conrad updates his work by showing increases in ADHD diagnosis, how adults now are increasingly diagnosed, and how the greatly expanded power of pharmaceutical companies can cloud medical and personal judgment.’ Phil Brown, Brown University, USA ’Although first published thirty years ago this book remains one of the few sociological studies of what has become a major social problem - the medicalization of hyperactivity. Its re-issue with a new introduction and concluding chapter makes the book essential reading for all those concerned with medicalization in general and the case of attention deficit hyperactivity disorder in particular. Immediately it will be clear how many of the concerns of the original book remain highly pertinent today, while the material that has been added highlights what has changed - in particular the expansion of ADHD to adults.’ Jonathan Gabe, Royal Holloway, University of London, UK ’...relevant and provocative...the attention to detail provides much to think about...this book is both challenging and sobering.’ Metapsychology Online '...a classic in social theory...a masterful acc