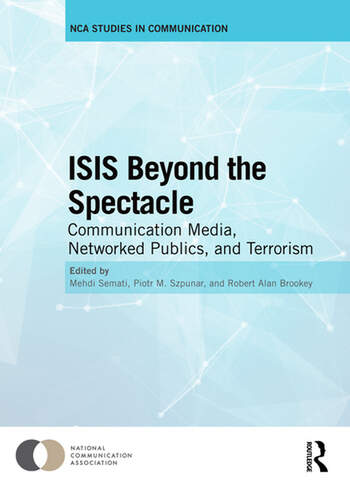 ISIS Beyond the Spectacle: Communication Media, Networked Publics, and Terrorism

What is ISIS? A quasi-state? A terrorist group? A movement? An ideology? As ISIS has transformed and mutated, gained and lost territory, horrified the world and been its punch line, media have been central to understanding it. The changing, yet constant, relationship between ISIS and the media, as well as its adversaries’ dependency on media to make sense of ISIS, is central to this book.

More than just the images of mutilated bodies that garnered ISIS its initial infamy, the book considers an ISIS media world that includes infographics, administrative reports, and various depictions of a post-racial utopia in which justice is swift and candy is bought and sold with its own currency. The book reveals that the efforts of ISIS and its adversaries to communicate and make sense of this world share modes of visual, aesthetic, and journalistic practice and expression. The short tumultuous history of ISIS does not allow for a single approach to understanding its relation to media. Thus, the book’s contributions are to be read as contrapuntal analyses that productively connect and disconnect, providing a much-needed complex account of the ISIS-media relationship.

This book was originally published as a special issue of Critical Studies in Media Communication.

1. The communication of horrorism: a typology of ISIS online death videos Lilie Chouliaraki and Angelos Kissas

2. One apostate run over, hundreds repented: excess, unthinkability, and infographics from the war with I.S.I.S. Rebecca A. Adelman

6. Cold War redux and the news: Islamic State and the US through each other’s eyes Barbie Zelizer

7. Deflating the iconoclash: shifting the focus from Islamic State’s iconoclasm to its realpolitik Ben O’Loughlin

Mehdi Semati is Professor of Communication at Northern Illinois University, USA, and has published on media and terrorism, and Islamophobia.

is Assistant Professor of Communication at Albany, State University of New York, USA, and is the author of Homegrown: Identity and Difference in the American War on Terror (2018).

is Professor of Telecommunications at Ball State University, USA, and has published on political economy and identity politics in new media and virtual environments.

ISIS Beyond the Spectacle: Communication Media, Networked Publics, and Terrorism