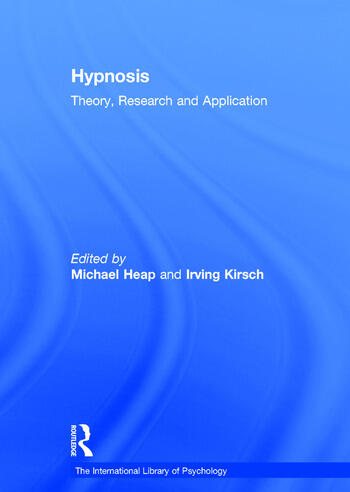 Modern hypnosis can be traced back to the 18th century and during this period mesmerism, as it was then known, was a healing practice which spread throughout Europe and North America. Since then hypnosis has been treated primarily as a psychological phenomenon and theories about hypnosis are grounded in mainstream psychology and its related disciplines. Most recently it has been subject to extensive clinical trials to investigate its therapeutic effectiveness. In their comprehensive introduction to this invaluable collection the editors trace the historical development of hypnosis, providing an excellent review of the theories that have tried to explain how hypnosis works and reflecting on the cultural and scientific attitudes and practices that prevailed at various times. They have selected the most important previously published papers that reveal how a scientific approach to understanding hypnosis as a psychological phenomenon has emerged over the last 70 years. They have also included a selection of reports on clinical applications and on legal and forensic issues. As such this volume will prove an invaluable reference resource for researchers and students already in the field and new scholars interested in learning more about hypnosis.

'...recommended to both practitioners and researchers with an interest in altered states of consciousness.' The Psychologist 'A new volume in Ashgate's outstanding series..... A valuable tool for every researcher and student in this field. A must for any scientific or psychological library.' Acta Comparanda