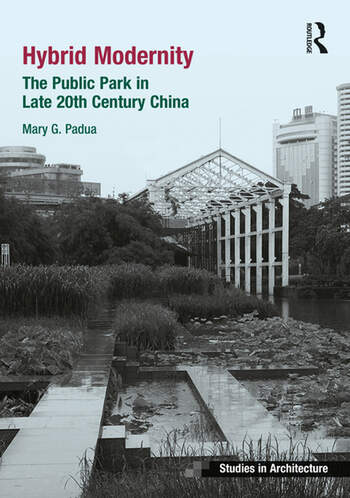 This book provides a detailed historical and design analysis of the development of parks and modern landscape architecture in late 20th century China. It questions whether the fusion of international influences with the local Chinese design vocabulary in late 20th century China has created a distinctive approach to public park design that is novel.

Hybrid Modernity proposes a new theory for examining the design of public parks built in post-Mao China since the reforms and sets the various processes for China’s late 20th century socio-cultural context. Drawing on modernization theory, research on China’s modernity, local and global cultural trends, it illustrates through a range of case study analysis how hybrid modernity defines a new design genre and language for the spatial forms of parks that emerged in China’s secondary cities. Featured case studies include the Living Water Park in, Chengdu, Sichuan province and West Lake Southern Scenic Area Master Plan in Hangzhou, Zhejiang province. This book argues that these forms represent a new stage in China’s history of landscape architecture. The work reveals that as a new profession, landscape architecture has greatly contributed to China’s massive urban experiment.

This book is an ideal read for students enrolled in landscape architecture, architecture, fine arts and urban planning programs that are engaged in learning the arts and international design education.

Table of Contents
Preface
List of Figures and Tables

Mary G. Padua, PhD, RLA, is an internationally recognized educator, thought leader, contemporary theorist and artist. Her research focuses on socio-cultural phenomena, human-centered design and the meaning of public space. She is one of the first English language writers on post-Mao designed landscapes and the discipline of landscape architecture as contributing agents to China’s late century urban experiment. She maintains MGP Studio, a critically-minded practice rooted in craft, equity, inclusion and restorative experiences, and teaches at Clemson University’s School of Architecture.