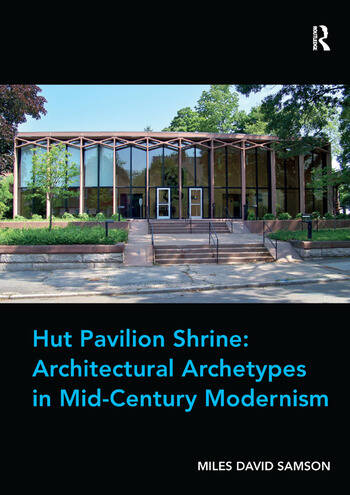 The phase of American architectural history we call 'mid-century modernism,' 1940-1980, saw the spread of Modern Movement tenets of functionalism, social service and anonymity into mainstream practice. It also saw the spread of their seeming opposites. Temples, arcades, domes, and other traditional types occur in both modernist and traditionalist forms from the 1950s to the 1970s. Hut Pavilion Shrine examines this crossroads of modernism and the archetypal, and critiques its buildings and theory. The book centers on one particularly important and omnipresent type, the pavilion - a type which was the basis of major work by Louis I. Kahn, Paul Rudolph, Philip Johnson, Minoru Yamasaki, and other eminent architects. While focusing primarily on the architecture culture of the United States, it also includes the work of British, European Team X, and Scandinavian designers and writers. Making connections between formal analysis, historical context, and theory, the book continues lines of inquiry which have been pursued by Neil Levine and Anthony Vidler on representation, and by Sarah Goldhagen and Alice Friedman on modernism’s 'forbidden' elements of the honorific and the visually pleasurable. It highlights the significance of 'pavilionizing' mid-century designers such as Victor Lundy, John Johansen, Eero Saarinen, and Edward Durell Stone, and shows how frequently essentialist and traditionalist types appeared in the roadside vernacular of drive-in restaurants, gas stations, furniture and car showrooms, branch banks, and motels. The book ties together the threads in mid-century architectural theory that addressed aspects of type, 'essential' structure, and primal 'humanistic' aspects of environment-making and discusses how these concerns outlived the mid-century moment, and in the designs and writings of Aldo Rossi and others they paved the way for Post-Modernism.

Miles David Samson was educated at the University of Chicago and Harvard University. He teaches art history at Worcester Polytechnic Institute. He has held fellowships at the Free University of Berlin and the Buell Center for the Study of American Architecture, Columbia University. His scholarship is in the history of architecture, especially the modern period, in relation to American visual culture. He lives in Franklin, Massachusetts with his wife and son.

’Hut Pavilion Shrine is a much-needed examination of the typologies that shaped postwar American modernism. Dismissed for years as meaningless formalisms, the book is a positive step towards understanding the aesthetic and intellectual content of American architecture after World War II. Further dispelling notions of mere eclecticism, it locates the origins of these typologies deep in architecture’s past. Samson successfully shows how architects previously treated monographically - among them Johnson, Rudolph, Saarinen and Kahn - had much in common intellectually.’ Timothy M. Rohan, University of Massachusetts Amherst, USA and author of The Architecture of Paul Rudolph