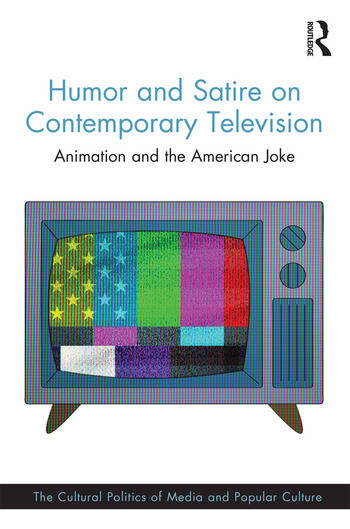 Humor and Satire on Contemporary Television: Animation and the American Joke

This book examines contemporary American animated humor, focusing on popular animated television shows in order to explore the ways in which they engage with American culture and history, employing a peculiarly American way of using humor to discuss important cultural issues. With attention to the work of American humorists, such as the Southwest humorists, Mark Twain, Dorothy Parker, and Kurt Vonnegut, and the question of the extent to which modern animated satire shares the qualities of earlier humor, particularly the use of setting, the carnivalesque, collective memory, racial humor, and irony, Humor and Satire on Contemporary Television concentrates on a particular strand of American humor: the use of satire to expose the gap between the American ideal and the American experience. Taking up the notion of ’The Great American Joke’, the author examines the discursive humor of programmes such as The Simpsons, South Park , Family Guy , King of the Hill, Daria, American Dad!, The Boondocks, The PJs and Futurama . A study of how animated television programmes offer a new discourse on a very traditional strain of American humor, this book will appeal to scholars and students of popular culture, television and media studies, American literature and visual studies, and contemporary humor and satire.

Preface; Irony and incongruity in American humor; Frontiers, suburbs, politics, and poop: setting, episodic structure, and the American carnivalesque in the southwest humorists and animated television programs; No laughing matter: the relationship between American humor and American collective memory and history; African-American multiculturalism in The PJs and The Boondocks; The unkindest cut: animated television programs and postmodernism; Conclusion: irony and nihilism: postmodern, or American?; Bibliography; Index.

’Humor is one of those elusive things that we think we understand until we try to explain it. Therefore only the brave and foolhardy among scholars try. But Silas Kaine Ezell, in Humor and Satire on Contemporary Television, has not only accepted the challenge but acquitted himself with wit, intelligence, and critical success. This is an invaluable addition to the growing bookshelf of thoughtful and enlightening studies in American humor.’ M. Thomas Inge, Randolph-Macon College, USA ’Every now and then, an outstanding work of original research and judicious insight expands the horizons of scholarship. This book adroitly explores the comedic link between the canons of American literary humor and its reach to contemporary animated television programs. The author's assessment that animated humor has evolved into a distinct art form that reflects the cultures' collective memory is an incisive contribution to the expanding studies of humor.’ Joseph Boskin, Boston University, USA

Humor and Satire on Contemporary Television: Animation and the American Joke