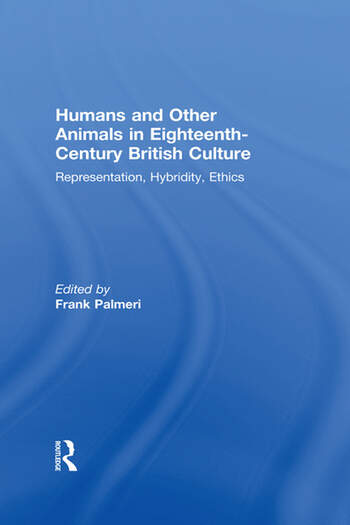 Combining historical and interpretive work, this collection examines changing perceptions of and relations between human and nonhuman animals in Britain over the long eighteenth century. Persistent questions concern modes of representing animals and animal-human hybrids, as well as the ethical issues raised by the human uses of other animals. From the animal men of Thomas Rowlandson to the part animal-part human creature of Victor Frankenstein, hybridity serves less as a metaphor than as a metonym for the intersections of humans and other animals. The contributors address such recurring questions as the implications of the Enlightenment project of naming and classifying animals, the equating of non-European races and nonhuman animals in early ethnographic texts, and the desire to distinguish the purely human from the entirely nonhuman animal. Gulliver's Travels and works by Mary and Percy Shelley emerge as key texts for this study. The volume will be of interest to scholars and students who work in animal, colonial, gender, and cultural studies; and will appeal to general readers concerned with the representation of animals and their treatment by humans.

Professor Frank Palmeri is Professor of English at the University of Miami, and author of Satire in Narrative (1990) and Satire, History, Novel: Narrative Forms, 1665-1815 (2003).

'This inspiring and critically sophisticated collection is an important addition to the growing literature on the representation of animals and animal-human relationships. This aspect of eighteenth-century and Romantic-period culture is subjected to well-informed and highly intelligent speculation from many unusual points of view, and readings of works such as Gulliver’s Travels and Frankenstein will be permanently changed by these analyses.' Christine Kenyon-Jones, King’s College London, UK '... a rewarding clutch of studies...' Times Literary Supplement ’... fascinating collection of essays... a valuable resource for scholars and students interested in the broad sweep of topics here, and for those more specifically focussed on particular seventeenth- and eighteenth-century authors.’ Review of English Studies ’... Frank Pameri situates the volume within the interdisciplinary field of animal studies. It would, however, be a shame for those outside this subfield to miss these engaging and provocative essays... These eleven essays detail the intricate tensions between the collective and the specific and between the human and the nonhuman, but they do not stop there. They offer up the boundary that marks human apart from other animals as part of the Enlightnment's classificatory impulse, and in doinfg so, they suggestively place the study of animals in history at the epicenter of a rich body of scholarship. As Palmeri notes, the study of animals has emerged as a subfield of its own, but this is a volume that deserves the attention of a much wider audience.’ Journal of British Studies