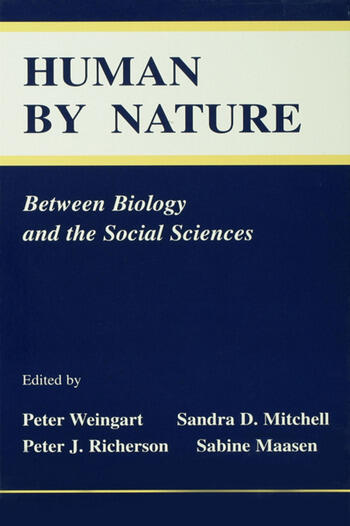 Human By Nature: Between Biology and the Social Sciences

Representing a wide range of disciplines -- biology, sociology, anthropology, economics, human ethology, psychology, primatology, history, and philosophy of science -- the contributors to this book recently spent a complete academic year at the Center for Interdisciplinary Research (ZiF) discussing a plethora of new insights in reference to human cultural evolution. These scholars acted as a living experiment of "interdisciplinarity in vivo." The assumption of this experiment was that the scholars -- while working and residing at the ZiF -- would be united intellectually as well as socially, a connection that might eventually enhance future interdisciplinary communication even after the research group had dispersed.

An important consensus emerged: The issue of human culture poses a challenge to the division of the world into the realms of the "natural" and the "cultural" and hence, to the disciplinary division of scientific labor. The appropriate place for the study of human culture, in this group's view, is located between biology and the social sciences.

Explicitly avoiding biological and sociological reductionisms, the group adopted a pluralistic perspective -- "integrative pluralism" -- that took into account both today's highly specialized and effective (sub-)disciplinary research and the possibility of integrating the respective findings on a case-by-case basis. Each sub-group discovered its own way of interdisciplinary collaboration and submitted a contribution to the present volume reflecting one of several types of fruitful cooperation, such as a fully integrated chapter, a multidisciplinary overview, or a discussion between different approaches. A promising first step on the long road to an interdisciplinarily informed understanding of human culture, this book will be of interest to social scientists and biologists alike.

"...should be especially helpful to economists and other social scientists who are looking for a balanced and well-informed primer on the nexus between the biological and the social sciences."
—Journal of Bioeconomics

Human By Nature: Between Biology and the Social Sciences