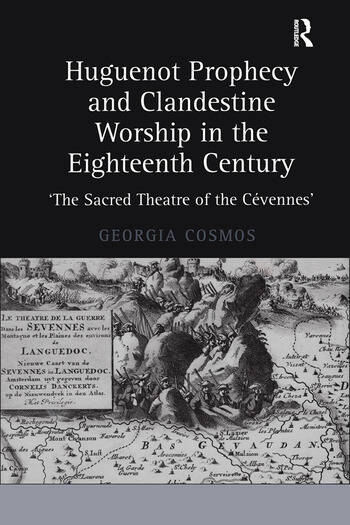 Huguenot Prophecy and Clandestine Worship in the Eighteenth Century: 'The Sacred Theatre of the Cévennes'

Following Louis XIV's revocation of the Edict of Nantes in 1685, French protestants faced the stark choice of abandoning their religion, or defying the law. Many fled abroad, whilst others continued to meet clandestinely for worship and to organise resistance to government policy, culminating in the bloody Camisard rebellion of 1702-10. During this period of conflict and repression, a distinct culture of prophecy and divine inspiration grew up, which was to become a defining characteristic of the dispersed protestant communities in southern France. Drawing on a wide range of printed and manuscript material, this study, examines the nature of Huguenot prophesying in the Cévennes during the early years of the eighteenth century. As well as looking at events in France, the book also explores the reactions of the Huguenot community of London, which became caught up in the prophesying controversy with the publication in 1707 of Le Théatre sacré des Cévennes. This book, which recounted the stories of exiles who had witnessed prophesying and miraculous events in the Cévennes, not only provided a first hand account of an outlawed religion, but became the centre of a heated debate in London concerning 'false-prophets'. By exploring French protestantism through voluntary testimonies given by Huguenot exiles in London, this study not only offers a rare glimpse of a forbidden religion, but also shows how a long-established immigrant church in London confronted the problems posed by recent arrivals infused with a radical sense of mystic purpose and divine revelation.

Contents: List of illustrations and maps; Acknowledgements; Note on citations; Introduction. Part I The London Context: The French churches in London; Huguenot storytellers in London in the 18th century. Part II The Cévennes: Forbidden assemblies: clandestine worship in the désert; The prophesyings: entranced preaching, prayers, exhortations and predictions of deliverance in the désert; The call to arms: Pont-de-Montvert, July 1702. Part III Contemporary Reactions in London: Trial by fire at Sérignan: an apocalyptic event in the Cévennes war and its echoes abroad; Broadsides, dialogues and pasquinades on the streets of London: sketches of the Camisard inspirés in printed libels; Examen du ThéÃ¢tre Sacré. Part IV Conclusion. Appendices; Bibliography; Index.

Georgia Cosmos is a Fellow at the University of Melbourne, Australia.

’... this is an important book both for students of Huguenot history and those interested in a little-known but revealing episode in the intellectual history of early Enlightenment England.’ Proceeding of the Huguenot Society

Huguenot Prophecy and Clandestine Worship in the Eighteenth Century: 'The Sacred Theatre of the Cévennes'