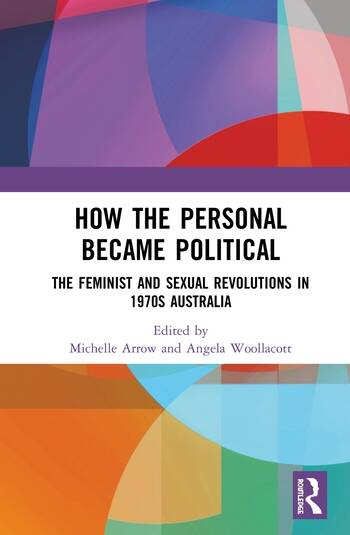 How the Personal Became Political: The Feminist and Sexual Revolutions in 1970s Australia

How the Personal became Political brings together new research on the feminist and sexual revolutions of the 1970s in Australia. It addresses the political and theoretical significance of these movements, asking how and why did matters previously considered private and personal, become public and political?

These movements produced a series of changes that were both interconnected and profound. The pill became generally available and sexuality was both celebrated and flaunted. Homosexuality was gradually decriminalized. Gay liberation and Women’s Liberation erupted. Activists established women’s refuges, rape crisis centres, and counselling services. Crucially, in Australia, these developments coincided with the election of progressive governments, who appointed women’s advisors and expanded the role of the state in the provision of childcare and other services. It was a decade of contestation and transformation.

This book addresses the political and theoretical significance of these 1970s revolutions, and poses key questions about the nature of sweeping change. What were the key policy shifts? How were protests connected to legislative reforms? How did Australia fit into the broader transnational movements for change? What are the legacies of these movements and what can activists today learn from them? Scholars from several disciplines offer fresh insight into this wave of social revolution, and its contemporary relevance.

This book was originally published as a special issue of the journal, Australian Feminist Studies.

Introduction - How the Personal Became Political: The Feminist and Sexual Revolutions of the 1970s, Michelle Arrow and Angela Woollacott

Chapter 1: How the Personal became Political: The Feminist Movement of the 1970s, Elizabeth Reid

Chapter 3: When the Personal Became Too Political: ASIO and the Monitoring of the Women’s Liberation Movement in Australia, Evan Smith

Chapter 6: Being a Woman’s Adviser at the State Level: Deborah McCulloch and Don Dunstan in 1970s South Australia, Angela Woollacott

Chapter 7: Before the Refrain: The Personal and the Political in South Australia’s Sexual Revolution, Clare Parker

Chapter 8: Abortion and the Limits of the Personal Becoming Political, Barbara Baird

Michelle Arrow is Professor in Modern History at Macquarie University. Her books include The Seventies: The Personal, The Political and the Making of Modern Australia (NewSouth, 2019) and Friday on Our Minds: Popular Culture in Australia Since 1945 (2009).

(FRHistS, FASSA, FAHA) is the Manning Clark Professor of History at the Australian National University. She is the author of many books, including Settler Society in the Australian Colonies: Self-Government and Imperial Culture (Oxford University Press, 2015) and most recently Don Dunstan: The Visionary Politician who Changed Australia (Allen and Unwin, 2019).

How the Personal Became Political: The Feminist and Sexual Revolutions in 1970s Australia