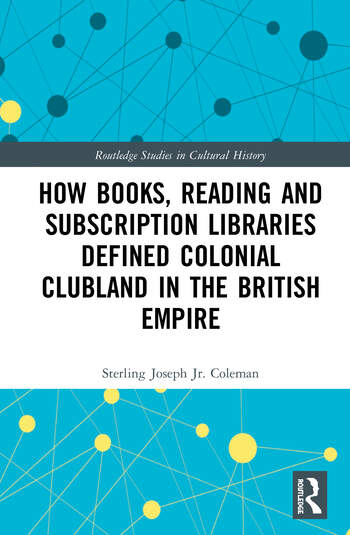 How Books, Reading and Subscription Libraries Defined Colonial Clubland in the British Empire

How Books, Reading and Subscription Libraries Defined Colonial Clubland in the British Empire argues that within an entangled web of imperial, colonial and book trade networks books, reading and subscription libraries contributed to a core and peripheral criteria of clubbability used by the "select people"—clubbable settler elite—to vet the "proper sort"—clubbable indigenous elite—as they culturally, economically and socially navigated their way towards membership in colonial clubland. As a microcosm for British-controlled areas of the Caribbean, Asia and Africa, this book assesses the history, membership, growth and collection development of three colonial subscription libraries—the Penang Library in Malaysia, the General Library of the Institute of Jamaica and the Lagos Library in Nigeria—during the nineteenth and twentieth centuries. This work also examines the places these libraries occupied within the lives of their subscribers, and how the British Council reorganized these colonial subscription libraries to ensure their survival and the survival of colonial clubland in a post-colonial world. This book is designed to accommodate historians of Britain and its empire who are unfamiliar with library history, library historians who are unfamiliar with British history, and book historians who are unfamiliar with both topics.

1. The Rise of the British Colonial Book Trade

3. Crises in the British Metropolis and Colonies

4. The Penang Library: A Survivor in Paradise

5. The General Library of the Institute of Jamaica: A Road Paved with Good Intentions

6. The Lagos Library: A Book Club by Any Other Name

7. Shifts in the British Metropolis and Colonies

How Books, Reading and Subscription Libraries Defined Colonial Clubland in the British Empire