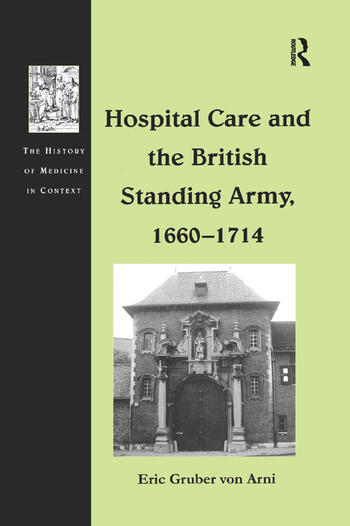 At the Restoration of the Monarchy in 1660, amongst the first acts of Charles II's government was the abolition of the New Model Army and the sweeping away of the legislation and institutions that had supported it, including most of the medical provisions provided by the republican regime. Nevertheless, a small rump of the Commonwealth forces was retained to form a royal standing army, which rapidly expanded over the next sixty years to become a formidable fighting force. Inevitably, as this force grew, the new government was compelled to provide medical care for its soldiers and ex-servicemen. Taking a broadly chronological approach, this book explores the nature and the quality of medical, nursing and welfare facilities provided in hospitals for soldiers during the formative years of the British standing army between 1660 and 1714. It shows how, over the course of latter part of the seventeenth century, the British army adapted and developed its facilities in line with new advances in science, medicine and military theory. Increased involvement in continental wars and contact with European armies provided inspiration for the founding of the well-known Royal Hospitals at Chelsea and Kilmainham, based on Louis XIV's HÃ´tel des Invalides. The work also provides an in-depth examination of the work of the hitherto sparsely documented field hospitals that provided acute casualty care to troops during the reigns of James II, William III and Queen Anne. Following on from his ground-breaking study of medical care during the English Civil Wars (Justice to the Maimed Soldier), Eric Gruber von Arni in this study shows how the British army of the Restoration period struggled to develop systems and institutions that could cope with the increasing scale of contemporary warfare. Through extensive archival research and a thorough understanding of military medical requirements, a lucid account is provided that will be of interest not only to military and medical historians, but also anyone interested in the development of early modern institutions and organisations.

Contents: Preface; Introduction; The Garrison Hospital at Tangier, 1662-1683; Hospitals and welfare for the standing army in Britain, 1660-1688; Hospital provision in Ireland, 1689-1692; Medical support during the Nine Years' War in Flanders; Soldier patients in the London hospitals; Hospital provision during Marlborough's campaigns; The army's hospitals in Spain and Portugal; Evaluation; Appendices; Bibliography; Index.

'Eric Gruber von Arni has provided a splendid account of the birth of modern military medicine, charting the development of hospitals in the British Army from the Restoration, through the Irish campaigns of William III, to the war of Spanish Succession. Contrary to established views, he shows that commanders such as Marlborough often took great interest in the care of their troops, and significantly reduced fatalities in doing so. Based on thorough research in a wide range of archives, this book will become essential reading for anyone interested in the history of early modern military medicine.' Dr Mark Harrison, Reader in the History of Medicine and Director of the Wellcome Unit for the History of Medicine, University of Oxford. '... von Arni has produced a detailed and valuable study of medical administration...' Journal of Military History 'No-one interested in the early days of the British Army should fail to have this book: it is masterly in its research and analysis, detailed in its documenting of a much-neglected yet vital area of the social history of the Army and meticulous in its footnotes.' Journal of the Society for Army Historical Research ’Gruber von Arni has produced an excellent and much-needed series of contributions to the professional literature for those serving within the field of military medicine. At the same time, this historical work provides a reading of English documents that will stimulate specialists in this period to go further in examining the subject, particularly the interrelationships between military and naval medical practice, and, even more importantly, to examine the subject in the light of foreign archival materials.’ English Historical Review