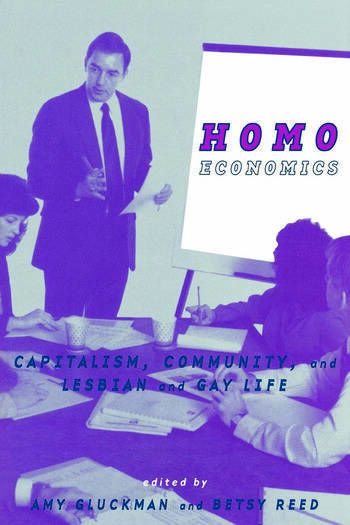 Homo Economics is the first honest account of the tense relationship between gay people and the economy. This groundbreaking collection brings together a variety of voices from the worlds of journalism, activism, academia, the arts, and public policy to address issues including the recent economic history of the gay community, the community's response to its changing economic circumstances, and the risks inherent in a narrow definition of liberation.

Amy Gluckman and Betsy Reed are the authors of The Gay Marketing Moment, an expose of myths about gay consumers that appeared in Dollars and Sense, a Boston-based progressive economics magazine. They are both members of the Dollars and Sense editorial collective.

"The high disposable income/disproportionate power/special rights canard lives on...because it makes a useful organizing tool for the right. The essays collected in Homo Economics provide the factual and analytic ammo to shoot it down, demonstrating that the affluent sector within the gay community is by no means representative of all gays and lesbians... [This book] builds on the earlier work of let-wing scholars, taking it to a new level of sophistication." -- The Nation
"Homo Economics is an exciting book analyzing gay, lesbian, bisexual and transgendered people's relationship to the market, to gender roles and to the economic system. These provocative essays clearly explain how class biases and divisions operate to frustrate queer progress. The authors argue convincingly for a movement with the vision and willingness to tackle the gender, class, racial, and economic inequalities of capitalism. In this period of global economic exploitation, social turmoil and domestic cutbacks, this collection makes an invaluable contribution to progressive thoery in general and to queer progressive practice in particular." -- Urvashi Vaid
"With titles like "I was a Stepford Queer at the Inaugural Ball," Homo Economics: Capitalism, Community, and Lesbian and Gay Life brings together lively commetnary on the often ironic relationship between homosexuality and commerce in America. Editors Amy Glucksman and Betsy Reed have assembled such front-liners as Tony Kushner (Angels in America) and New York-bases journalist Jeffrey Escoffier, as well as respected academics of the lifes of Julie Matthaei, within this acute yet entertaining set of 20 missives." -- Publishers Weekly
"The volume is needed, timely, well conceptualized, and without substantive competition...Gluckman and Reed's potential audience is vast and largely untapped." -- Rhonda M. Williams, University of Maryland, College Park
"Homo Economics is a welcome addition to the small volume of literature exploring the relationship between lesbian and gay communities and the economy." -- Prue Hyman, The Lesbian Review of Books