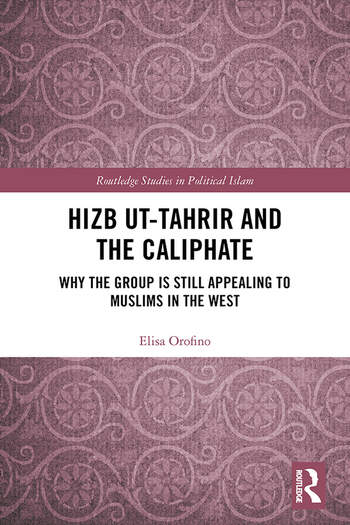 Hizb ut-Tahrir and the Caliphate: Why the Group is Still Appealing to Muslims in the West

Investigating the appeal of the group Hizb ut-Tahrir (HT), the study expands on why non-violent radical forms of Islam still attract segments of Muslim communities in the West. Being one of the few comprehensive studies on HT, this book discusses how this Islamist group advocate for the caliphate and for the implementation of shari’a but also reject violence as a tool to achieve these goals.

Through interviews with current HT members, observation at HT-sponsored events and social media analysis, this book leads the reader into the world of vocal radical Islamist groups, exploring their goals and activities in Western states, with a special focus on the UK and Australia. In fact, as many other non-violent Islamist groups, HT represent the choice of all those individuals who might share Islamist arguments but who reject the use of violence. Given their non-violent nature, vocal radicals are mostly free to operate in the Western world, attracting new members, conducting a relentless campaign against the "West as a system" and representing a serious source of concern not only for national authorities but for the broader Muslim community.

This book stands as an original publication and paves the way to a new area of study crossing sociology, Islamic studies and political sciences. This book is one of the few contributions on vocal and radical Islamism to date.

1. The Appeal of Radical Islam: Supporting "Vocal" instead of Violent Groups. Hizb ut-Tahrir as a Case Study

2. Hizb ut-Tahrir’s Appeal to Muslims in the West: The Effectiveness of an Organisational Model

3. Hizb ut-Tahrir’s Challenge to Western States: The War of Ideas in the Political and Social Fields

4. The Uniqueness of Hizb ut-Tahrir as an Agent vis-à-vis its Competitors

has been researching on Islamism, terrorism and radicalization since 2009. After completing her PhD in Islamic Studies at the University of Melbourne, Elisa joined PIER at Anglia Ruskin University in October 2018 as a Post-Doc Research Fellow. Her most recent publication is "Researching ‘Intellectual Radicals’ in the West" (2019) SAGE Research Methods Cases.

Hizb ut-Tahrir and the Caliphate: Why the Group is Still Appealing to Muslims in the West