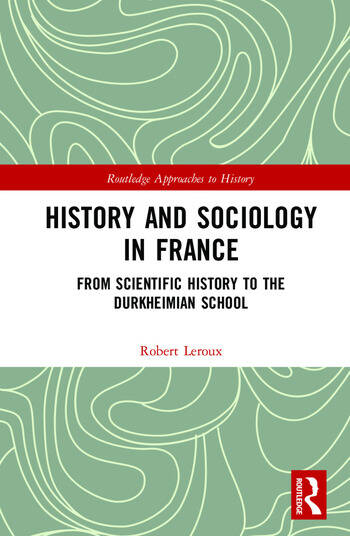 History and Sociology in France: From Scientific History to the Durkheimian School

In the late 19th century and early part of the 20th, with the coming of age of sociology in France, the idea that there could be a “science” of history was the subject of much and varied debate. The methodological problems surrounding historical knowledge that were debated throughout this period concerned not only scientific history, but the social sciences as well, and sociology more specifically.

Although sociology was from its origins in competition with the discipline of history, from the outset, it too was interested in history as a form of objective knowledge. Many of sociology's founders believed that by retracing historical processes, they could make a clean break with abstraction and metaphysics. For their part, historians generally remained hostile to any kind of systematization. And yet, at the end of the 19th century, the science of history would draw some valuable lessons from the emerging methodology of sociology. It was in large part under the impetus of the issues and problems raised by the philosopher Henri Berr and by the Durkheimian School, with the economist François Simiand as its lead protagonist, that the community of historians, increasingly aware of the limits of narrative history, turned so enthusiastically to social and economic history – just as Durkheim and his disciples consulted history in order to avoid the twin pitfalls of the philosophy of history and of introspective psychology. History and Sociology in France focuses on this dialogue of the two neighboring sciences.

Part I: The Idea of Scientific History

1. History and the Social Sciences

4. Henri Berr, the Organizer and Promoter of Synthesis

5. The Durkheimian School and History

Robert Leroux is a professor of sociology at the University of Ottawa.

History and Sociology in France: From Scientific History to the Durkheimian School