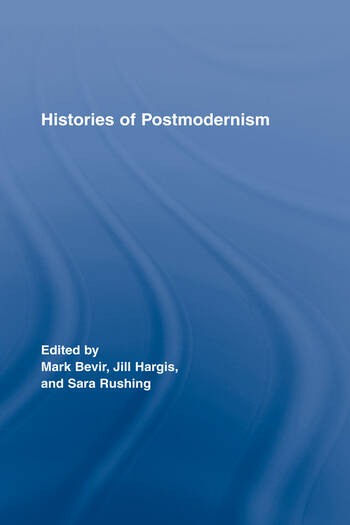 Histories of Postmodernism reexamines the history of the constellation of ideas and thinkers associated with postmodernism. The increasingly dominant historical narrative depicts a relatively smooth development of ideas from Friedrich Nietzsche and Martin Heidegger, through a range of French theorists, most notably Jacques Derrida and Michel Foucault, to contemporary American thinkers such as Richard Rorty, Edward Said, and Judith Butler. Histories of Postmodernism challenges this narrative by highlighting the local contexts of relevant theorists and thus the crucial distinctions that divide successive articulations of the themes and concepts associated with postmodernism. As postmodern ideas traveled from nineteenth-century Germany to mid-twentieth-century France and on to the contemporary United States, so the relevant theorists transformed that heritage within the context of particular intellectual traditions and specific political and aesthetic issues.

Chapter 2: Honesty as the Best Policy: Nietzsche on Redlichkeit and the contrast between Stoic and Epicurean strategies of the self

Chapter 3: Escape from the Subject: Heidegger’s Das Man and Being-in-the-world

Chapter 4: A Rock and a Hard Place: Althusser, Structuralism, Communism and the Death

of the Anticapitalist Left

Chapter 5: Hammer without a Master: French Phenomenology and the Origins of

Deconstruction (Or, How Derrida Read Heidegger)

Chapter 6: ‘A Kind of Radicality’: The Avant-garde Legacy in Postmodern Ethics

Chapter 8: From the ‘Death of Man’ to Human Rights: the Paradigm Change in French

Chapter 9: ‘The Democratic Literature of the Future’: Richard Rorty, Postmodernism and the American Poetic Tradition

Chapter 10: The Secular and the Post-Secular in the Thought of Edward Said

Chapter 11: Longing For ‘A Certain Kind of Future’: Drucilla Cornell, Sexual Difference and the Imaginary Domain

Mark Bevir is a Professor of Political Science at the University of California, Berkeley. He is the author of The Logic of the History of Ideas (1999) and New Labour: A Critique (2005), and coauthor of Interpreting British Governance (2003) and Governance Stories (2006).

Jill Hargis is an Assistant Professor at California State Polytechnic University Pomona where she teaches political theory and public law.

Sara Rushing is an Adjunct Professor of Political Science at Linfield College.