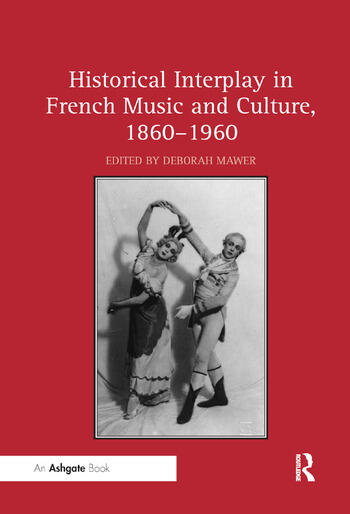 This edited volume of case studies presents a selective history of French music and culture, but one with a dynamic difference. Eschewing a traditional chronological account, the book explores the nature of relationships between one main period, broadly the 'long' modernist era between 1860–1960, and its own historical ‘others’, referencing topics from the Romantic, classical, baroque, renaissance and medieval periods. It probes the emergent interplay, intertextualities and scope for reinterpretation across time and place. Notions of cultural meaning are paramount, especially those pertaining to French identity, national and individual. While founded on historical musicology, the approach benefits from interdisciplinary association with philosophy, political history, literature, fine art, film studies and criticism. Attention is paid to French composers’ celebrations and remakings of their predecessors. Editions of and writings about earlier music are examined, together with the cultural reception of performances of past repertoire. Organized into two parts, each of the eleven chapters characterizes a specific cultural network or temporal interplay, which may result in synthesis, disjunction, or historical misreading. The interwar years and those surrounding the Second World War prove particularly rich sources of enquiry. This volume aims to attract a wide readership of musicologists and musicians, as well as cultural historians, other humanities scholars and concert-goers.

Deborah Mawer is Research Professor of Music and the Director of Research at the Royal Birmingham Conservatoire, Birmingham City University, UK, where she also leads the large project ‘Accenting the Classics’, funded by the Arts and Humanities Research Council.