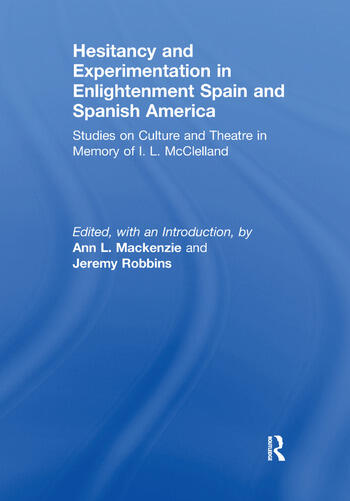 Hesitancy and Experimentation in Enlightenment Spain and Spanish America

Published in memory of Ivy L. McClelland, a pioneer-scholar of Spain’s eighteenth century, this volume of original essays contains, besides an Introduction to her career and internationally influential writings, three previously unpublished essays by McClelland and nine studies by other scholars, all of which are focused on elucidating the Enlightenment and its characteristic manifestations in the Hispanic world.

Among the Enlightenment writers and artists, works and genres, themes and issues discussed, are: Nicolás Moratín and epic poetry, Lillo’s The London Merchant and English and French influences on eighteenth-century Spanish drama, José Marchena and literary historiography, oppositions and misunderstandings within Spanish society as reflected in El sí de las niñas, Goya and the visual arts, Quintana’s Pelayo and historical tragedy, Enlightenment discourse, the Periodical Press, theatre as propaganda, the ideology and politics of Empire, the roots of revolt in late viceregal Quito, women’s experience of Enlightenment in Spain, social and cultural difference in colonial Peru, ideological debate and uncertainty during the Age of Reason, eighteenth-century Spain on the nineteenth-century stage, and public opinion in Spain on the eve of the French, and European, Revolution.

First published as a Special Issue of the Bulletin of Spanish Studies (LXXXVI [November–December 2009], Nos 7–8), this book will be of value and stimulus to all scholars concerned to investigate and interpret the culture, theatre, ideology, society and politics of the Enlightenment in Spain, Europe and Spanish America.

Ann L. Mackenzie is Ivy McClelland Research Professor of Spanish at the University of Glasgow, UK.

Jeremy Robbins is Forbes Professor of Hispanic Studies at the University of Edinburgh, UK.

Hesitancy and Experimentation in Enlightenment Spain and Spanish America