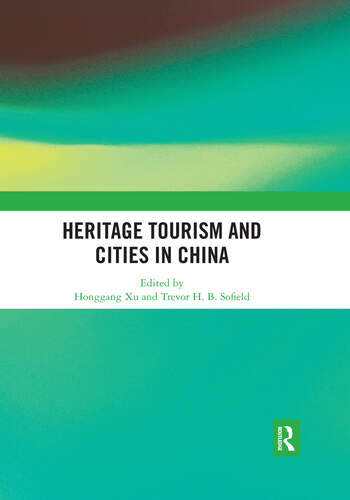 Heritage Tourism and Cities in China

China has surged into the 21st century as one of the most rapidly modernizing countries in the world. Its burgeoning cities reflect this extraordinary growth with a dazzling array of new architectural forms and designs. In its transformation, the 5000-year old heritage of its built civilization, embedded in its villages, towns and cities, has often been replaced. The Chinese Government, aware of the value of this heritage, has in recent years taken concrete steps to conserve and preserve not just national icons such as the Forbidden Palace in Beijing, the Great Wall of China and the Grey Goose Pagoda in Xian but also the more general historic fabric of its urban development over the centuries. The challenges are great, particularly as population growth and rural-urban drift have combined to place enormous pressure on city resources. The chapters in this book explore these challenges as well as analysing other institutional, cultural, social and economic issues related to urban heritage conservation and utilization, with a focus on the role of tourism in reinforcing conservation values by finding new uses for old buildings and districts. This book covers new areas of heritage tourism research in Chinese cities.

The chapters were originally published in a special issue of the Journal of Heritage Tourism.

2. The heritage of Chinese cities as seen through the gaze of zhonghua wenhua – ‘Chinese common knowledge’: Guilin as an exemplar

5. Spatial–temporal distribution characteristics of industrial heritage protection and the influencing factors in a Chinese city: a case study of the Tiexi old industrial district in Shenyang

Honggang Xu is a Professor from Sun Yat-Sen University. Her interest is tourism geography. She is a senior Editor for the journal, Tourism Geographies, and has published widely in leading international journals with her students and colleagues in China and abroad, and is a frequent presenter at international tourism and geography conferences around the world.

Trevor Sofield, Visiting Professor, Center for Tourism Planning and Research, Sun Yat Sen University, China, has been involved in more than thirty tourism planning & development projects and research in China for the past 25 years. Originally from Australia he has undertaken more than 100 tourism projects in more than twenty other countries in the Asia Pacific region and Africa, including with UNESCO.

Heritage Tourism and Cities in China