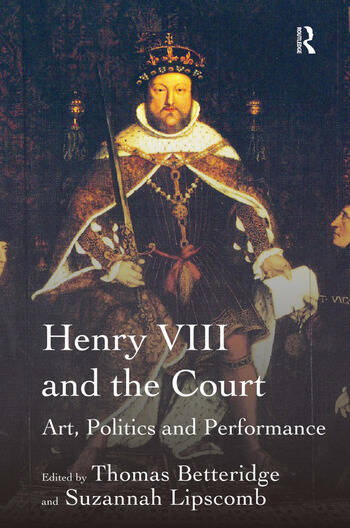 Henry VIII and the Court: Art, Politics and Performance

After 500 years Henry VIII still retains a public fascination unmatched by any monarch before or since. Whilst his popular image is firmly associated with his appetites - sexual and gastronomic - scholars have long recognized that his reign also ushered in profound changes to English society and culture, the legacy of which endure to this day. To help take stock of such a multifaceted and contested history, this volume presents a collection of 17 essays that showcase the very latest thinking and research on Henry and his court. Divided into seven parts, the book highlights how the political, religious and cultural aspects of Henry's reign came together to create a one of the most significant and transformative periods of English history. The volume is genuinely interdisciplinary, drawing on literature, art history, architecture and drama to enrich our knowledge. The first part is a powerful and personal account by Professor George W. Bernard of his experience of writing about Henry and his reign. The next parts - Material Culture and Images - reflect a historical concern with non-documentary evidence, exploring how objects, collections, paintings and buildings can provide unrivalled insight into the world of the Tudor court. The parts on Court Culture and Performance explore the literary and theatrical world and the performative aspects of court life, looking at how the Tudor court attempted to present itself to the world, as well as how it was represented by others. The part on Reactions focuses upon the political and religious currents stirred up by Henry's policies, and how they in turn came to influence his actions. Through this wide-ranging, yet thematically coherent approach, a fascinating window is opened into the world of Henry VIII and his court. In particular, building on research undertaken over the last ten years, a number of contributors focus on topics that have been neglected by traditional historical writing, for example gender, graffiti and clothing. With contributions from many of the leading scholars of Tudor England, the collection offers not only a snapshot of the latest historical thinking, but also provides a starting point for future research into the world of this colourful, but often misrepresented monarch.

Thomas Betteridge is Professor of English and Drama at Oxford Brookes University. He has published numerous books, chapters and articles on the English Reformation and the Tudor court. He has recently edited, with Thomas S. Freeman, a collection entitled Henry VIII and History (Ashgate, 2012). Suzannah Lipscomb is Senior Lecturer and Convenor for History at New College of the Humanities, London. She is the author of 1536: The Year that Changed Henry VIII (2009) and A Visitor’s Companion to Tudor England (2012). She also continues to hold a post as Lecturer in Early Modern History at the University of East Anglia and, having been a Research Curator at Hampton Court Palace, is now a consultant to Historic Royal Palaces.

'... not a single essay falls flat. All contain fresh, compelling research and challenge readers to think again about elements of this subject that we thought we understood. ... Henry VIII and the Court challenges readers to assess more thoroughly the precedents, good and bad, used by contemporaries to understand Henry’s rule.' Renaissance Quarterly ’My book of the year was Henry VIII and the Court... The 17 historians involved in the project are all working at the coalface of history, collaboratively changing our perception of the king and his world. This will be the stuff of popular history in the future: read it here first’. Lucy Worsley, The Daily Telegraph: Best books of 2013 'The collection as a whole gives an extremely entertaining, interdisciplinary overview of the wide-ranging debates and issues surrounding the arts, politics and performances at the Henrician court... The volume extends the range of sources and paradigms through which the King and his Court should be considered. No less significant, it also appears to have fully mastered the all-important and oft-forgotten notion, to delight and instruct.' Journal of the Northern Renaissance 'The volume is genuinely interdisciplinary, drawing on literature, art history, architecture and drama to illuminate various aspects of the court ... a rich collection, and one which adds depth and context to our otherwise somewhat over- politicised vision of Henry VIII's court. The plates are carefully selected and beautifully reproduced. The presentation generally is excellent and the publishers, no less than the editors, are to be congratulated upon this admirable collection.' Archiv fur Reformationsgeschichte 'By challenging canonical views of Henry, tapping new sources, and approaching familiar texts from new perspectives, these insightful and readable essays ask us to reevaluate a king we thought we already knew.' Recusant History

Henry VIII and the Court: Art, Politics and Performance