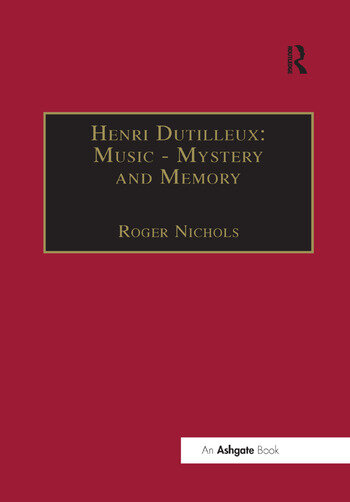 Born in 1916, Henri Dutilleux is one of France’s leading composers, enjoying an international reputation for his beautifully crafted works. This is the first translation into English of a series of interviews between Dutilleux and the French writer and journalist Claude Glayman which took place in 1996. Dutilleux discusses aspects of his life including his early training at the Paris Conservatoire, the German occupation of France and the time that he spent in the United States. The interviews reveal much about his music and his approach to composition, as well as the influences on his musical style. Originally published by Actes Sud in 1997, this English edition is the work of translator Roger Nichols, one of the UK’s leading specialists on French music.

Contents: The portrait of Chopin; An anxious child; Of bells and belfries; Paris. The Conservatoire - 'artists' entrance'; In the style of ...; Interlude at the Villa Medici; From the occupation to the liberation; in search of an aesthetic; Geneviève Joy; Pelléas in September 1940; With Grémillon, Fano and Pialat; Opus 1; French radio - first symphony; Serialism: historical necessity or terrorism?; Les ballet de Paris - Le Loup; On Jean Cassou; 'Le Double', via MÃ¼nch; Memory and not leitmotif; Nalraux as music director; Métaboles for George Szell; May 1968; Tout un monde lointain; On the name 'Sacher'; Aren't the notes enough?; Nocturnes - timbres, espace, mouvement; Ainsi la nuit - the economy of the string quartet; Mystère de l'instant; Festivals; L'arbre des songes; Le jeu des contraires and subsequent works; Twenty-four strings and a cymbalom; Against the tide or unclassifiable?; Science and music; French music and the outside world; Index.

Roger Nichols has written and broadcast widely on French music. His translations of the correspondence of Berlioz and of Debussy have been published by Faber, and his translation of Jean-Michel Nectoux’s Gabriel Faure: les voix du clair-obscur was published by CUP in 1991.

'In its translated form, this book [...] is an important addition to the small corpus of English-language material on Henri Dutilleux... There is much new, valuable material here that sheds light on Dutilleux's views on life and art... The translated narrative holds together well, and is engaging throughout.' Brio '... this book deserves unqualified recommendation and may well be enjoyed even by those relatively unfamiliar with Dutilleux's richly satisfying music... Roger Nichols' very natural and readable translation.' Classical Music '... a welcome addition to the literature on this significant French composer... The strength of Glayman's study is that it is an easy-to-read account of various aspects of Dutilleux's life, which simultaneously reveals much about the context surrounding his works.' Musicology Australia 'Roger Nichols could hardly have been more appropriate to undertake the translation of the Dutilleux conversations... Nichols' translation is both accurate and elegant, preserving, for the most part, the subtle nuances (and oddities) of the original... should be considered essential reading for all scholars of French and twentieth-century music.' Notes