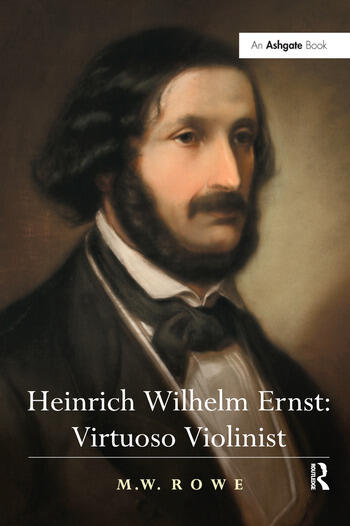 From 1840-57, Heinrich Ernst was one of the most famous and significant European musicians, and performed on stage, often many times, with Berlioz, Mendelssohn, Chopin, Liszt, Wagner, Alkan, Clara Schumann, and Joachim. It is a sign of his importance that, in 1863, Brahms gave two public performances in Vienna of his own and Ernst's music to raise money for the now mortally ill violinist. Berlioz described Ernst as 'one of the artists whom I love the most, and with whose talent I am most sympathetique', while Joachim was in no doubt that Ernst was 'the greatest violinist I ever heard; he towered above the others'. Many felt that he surpassed the expressive and technical achievements of Paganini, but Ernst, unlike his great predecessor, was also a tireless champion of public chamber music, and did more than any other early nineteenth-century violinist to make Beethoven's late quartets widely known and appreciated. Ernst was not only a great virtuoso but also an accomplished composer. He wrote two of the most popular pieces of the nineteenth century - the Elegy and the Carnival of Venice - and he is best known today for two solo pieces which represent the ne plus ultra of technical difficulty: the transcription of Schubert's Erlking, and the sixth of his Polyphonic Studies, the variations on The Last Rose of Summer. Perhaps he made his greatest contribution to music through his influence on Liszt's outstanding masterpiece, the B minor piano sonata. In 1849, Liszt conducted Ernst playing his own Concerto Pathétique, a substantial single-movement work, in altered sonata form, using thematic transformation. Soon after this performance, Liszt wrote his Grosses Konzertsolo (1849-50), his first extended single-movement work, using altered sonata form, and thematic transformation. This is now universally acknowledged to be the immediate forerunner of the sonata, which refines and develops all these techniques. Liszt made his debt clear when, three years after completi

Educated at Cranbrook School, and Cambridge and York Universities, M.W. Rowe is now lecturer in aesthetics at Birkbeck College, University of London. He has published many articles in philosophy and literary criticism, some of which are collected in Philosophy and Literature: A Book of Essays (Ashgate, 2004), but he has long had an interest in nineteenth-century music, particularly the repertoire for violin and for piano. A violinist himself, he has given several performances of Ernst's music.

'... the author provides [...] a useful and thought-provoking description of Ernst's Jewish background and its effect on his career, and, from the numerous letters quoted, we are afforded vivid glimpses of many of Ernst's friends and colleagues... Students of the history of performance practice will find much of interest in these pages... this well-researched and well-written book fills a conspicuous gap in the literature in a highly successful manner.' Ad Parnassum '[Ernst’s life and his singular personality] are discussed in the quite masterly introduction Mark Rowe contributes to his definitive biography of Ernst...' Gramophone