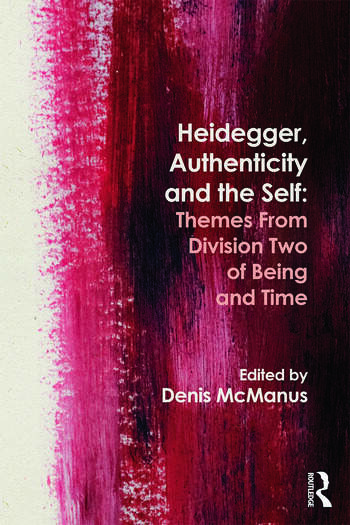 Heidegger, Authenticity and the Self: Themes From Division Two of Being and Time

Though Heidegger’s Being and Time is often cited as one of the most important philosophical works of the last hundred years, its Division Two has received relatively little attention. This outstanding collection corrects that, examining some of the central themes of Division Two and their wide-ranging and challenging implications.

An international team of leading philosophers explore the crucial notions that articulate Heidegger’s concept of authenticity, including death, anxiety, conscience, guilt, resolution and temporality. In doing so, they clarify the bearing of Division Two’s reflections on our understanding of intentionality, normativity, responsibility, autonomy and selfhood. These discussions raise important questions about how we may need to rethink the morals of Division One of Being and Time, the broader project to which that book was devoted, the shaping influence of figures such as Aristotle and Kierkegaard, as well as Heidegger’s relationship with his contemporaries and successors.

Essential reading for students and scholars of Heidegger’s thought, and anyone interested in key debates in phenomenology, ethics, metaphilosophy and philosophy of mind.

Introduction Denis McManus  1. Authenticity and the Question of Being Charles Guignon  2. Owned Emotions: Affective Excellence in Heidegger on Aristotle Katherine Withy  3. A Tale of Two Footnotes: Heidegger and the Question Of Kierkegaard Clare Carlisle  4. Death, Guilt, and Nothingness in Luther, Kierkegaard and Being and Time George Pattison  5. Anxiety’s Ambiguity: Being and Time through Haufniensis’ Lenses Jeffrey Haynes  6. Jaspers, Limit-Situations, and the Methodological Function of Authenticity Stephan Käufer  7. Essential Guilt and Transcendental Conscience William Blattner  8. Things Fall Apart: Heidegger on the Constancy and Finality of Death Taylor Carman  9. Authenticity and the Absence of Death Daniel O. Dahlstrom  10. Anxiety, Choice and Responsibility in Heidegger’s Account of Authenticity Denis McManus  11. Reordering the Beginning Chapters of Division Two of Being and Time Sophia Dandelet and Hubert Dreyfus  12. Autonomy, Authenticity, and the Self Mark A. Wrathall  13. Responsibility, Autonomy, Affectivity: a Heideggerian Approach Steven Galt Crowell  14. Early Heidegger and Sartre on Authenticity Peter Poellner  15. Nothingness and Phenomenology: The Co-disclosure of Sartre and Heidegger Stephen Mulhall.  Index

DenisMcManus is Professor of Philosophy at the University of Southampton, UK. He is the author of The Enchantment of Words: Wittgenstein’s Tractatus Logico-Philosophicus (2006), Heidegger and the Measure of Truth (2012), and editor of Wittgenstein and Scepticism (2004).

"This excellent collection, with contributions from leading scholars on a well-chosen set of topics, should go a long way towards correcting the relative neglect of Division II of Being and Time. Future discussions of and classes on Heidegger will benefit greatly from this work. Highly recommended for anyone interested in Heidegger and continental philosophy in general." - Lee Braver, University of South Florida, USA

"Division II of Being and Time has long been considered an existentialist embarrassment, or a barely disguised fascist manifesto, or some confused amalgamation of both. With this series of consistently excellent essays, a philosophically serious reception of Division II has finally begun." - Joseph Schear, University of Oxford, UK

"Let no one again complain that Division II of Being and Time has been neglected in the Anglo-American Heidegger scholarship. This important collection reflects the significant advances that have been made in recent years in coming to terms with the "other half" of Heidegger’s magnum opus. The result is a deeper understanding of both the part and the whole, advances in the critical assessment of Heidegger’s position, and some startling applications to contemporary debates." - Wayne Martin, University of Essex, UK

Heidegger, Authenticity and the Self: Themes From Division Two of Being and Time