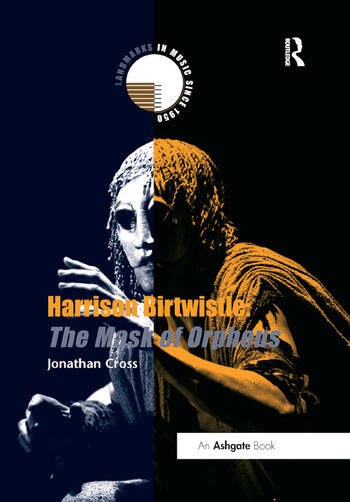 Harrison Birtwistle: The Mask of Orpheus

Hailed at its premiere at the London Coliseum in 1986 as the most important musical and theatrical event of the decade, The Mask of Orpheus is undoubtedly a key work in Harrison Birtwistle's output. His subsequent stage and concert pieces demand to be evaluated in its light. Increasingly, it is also viewed as a key work in the development of opera since the Second World War, a work that pushed at the boundaries of what was possible in lyrical theatre. In its imaginative fusion of music, song, drama, myth, mime and electronics, it has become a beacon for many younger composers, and the object of wide critical attention. Jonathan Cross begins his detailed study of this 'lyric tragedy' by placing it in the wider context of the reception of the Orpheus myth. In particular, the significance of Orpheus for the twentieth century is discussed, and this provides the backdrop for an examination of Birtwistle's preoccupation with the story in a variety of works across his creative life. The sources and genesis of The Mask of Orpheus are explored. This is followed by a close reading of the work's three acts, analysing their structure and meaning, investigating the relationship between music, text and drama, drawing on Zinovieff's textual drafts and Birtwistle's compositional sketches. The book concludes by suggesting a range of contexts within which The Mask of Orpheus might be understood. Its central themes of time, memory and identity, loss, mourning and melancholy, touch a deep sensibility in late-modern society and culture. Interviews with the librettist and composer round off this important study.

Jonathan Cross is Professor of Musicology at Christ Church, University of Oxford, UK

'This study offers, for the first time, a fascinating scene-by-scene commentary on Birtwistle's magnum opus. Drawing on revealing insights from the composer's sketches, Jonathan Cross negotiates expertly between details of compositional structure and the work's poetic content. The frequent references to other works make this book a valuable companion for anyone interested in a deeper understanding of Birtwistle's music.' Robert Adlington, University of Nottingham, UK 'With Jonathan Cross, author of numerous important texts on Birtwistle, [The Mask of Orpheus] has found a most persuasive advocate.' Music and Letters

Harrison Birtwistle: The Mask of Orpheus