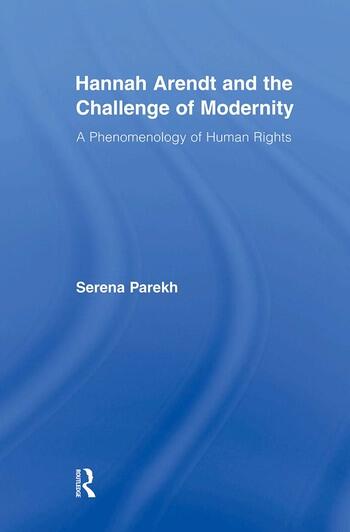 Hannah Arendt and the Challenge of Modernity: A Phenomenology of Human Rights

Hannah Arendt and the Challenge of Modernity explores the theme of human rights in the work of Hannah Arendt. Parekh argues that Arendt's contribution to this debate has been largely ignored because she does not speak in the same terms as contemporary theoreticians of human rights. Beginning by examining Arendt’s critique of human rights, and the concept of "a right to have rights" with which she contrasts the traditional understanding of human rights, Parekh goes on to analyze some of the tensions and paradoxes within the modern conception of human rights that Arendt brings to light, arguing that Arendt’s perspective must be understood as phenomenological and grounded in a notion of intersubjectivity that she develops in her readings of Kant and Socrates.

Introduction: The Groundlessness of Modernity

Chapter One: The Paradox of Human Rights

Chapter Two: Human Dignity and the Ethos of Modernity

Serena Parekh is an assistant professor of philosophy at the University of Connecticut, jointly appointed with the Human Rights Institute. She received her PhD in philosophy from Boston College. Professor Parekh has recently published articles in Philosophy and Social Criticism, the Journal of Human Rights, and Human Rights Quarterly.

Hannah Arendt and the Challenge of Modernity: A Phenomenology of Human Rights