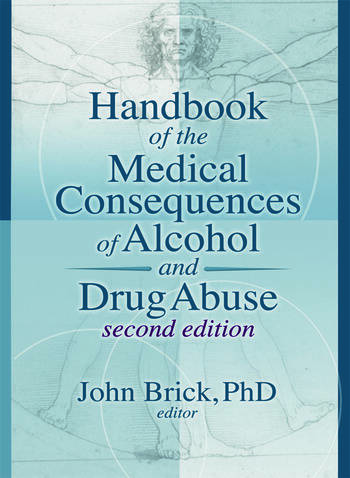 Handbook of the Medical Consequences of Alcohol and Drug Abuse

The essential newly-expanded reference that needs to be on the desk of every health care professional who encounters substance abusers.

Handbook of the Medical Consequences of Alcohol and Drug Abuse, Second Edition is the newly-updated classic reference text that provides even more detailed and expanded information on the pharmacological, toxicological, and neuropsychological consequences of alcohol and drug abuse. Eight new chapters of crucial information have been added. Written by leading experts in the fields of medical physiology, psychopharmacology, and neuropsychology, this valuable resource provides the detailed alcohol and drug information health professionals in all fields need to know.

Handbook of the Medical Consequences of Alcohol and Drug Abuse, Second Edition greatly expands on the expert information provided in the first edition. This text provides reviews of the cardiovascular, neurological, pulmonary, gastrointestinal, psychological, and hepatic effects of commonly abused drugs. The book also provides in-depth explanations of the mechanisms by which these psychoactive drugs exert their biobehavioral effects as well as current thinking about—and definitions of—abuse, dependence, and alcohol/drug use.

"The book is unique in its orientation toward the health effects of substance abuse . . . the extensive information compiled in this work will be valuable to both researchers and medical clinicians working with people with substance use problems in any setting."

Handbook of the Medical Consequences of Alcohol and Drug Abuse